The most capped Bangladeshi cricketer in the T20Is and the country’s highest run-getter in this format, Mahmudullah will have a different experience during the upcoming ICC T20 World Cup in the UAE and Oman next month as he is all set to lead the Tigers for the first time in an ICC event after playing only as a player in 10 previous ICC tournaments. Although Bangladesh demonstrated below-par performances in the previous six editions of the T20 World Cup, the 35-year old experienced campaigner keeps his trust in his teammates in order to improve their tournament history this time around. Mahmudullah, who during the last home series, leapfrogged Mashrafe Mortaza to become the most successful skipper for Bangladesh in the shorter format, recently shares his thoughts with The Daily Sun on his team’s chances in the upcoming global event, their preparations for it, his expectations from young guns of the side and on many other aspects.

The Daily Sun: You are one of only six cricketers to feature in all T20 World Cups including the upcoming one. Two of your teammates – Shakib Al Hasan and Mushfiqur Rahim also have the same feat to their names. What does it mean to you?

Mahmudullah: Alhamdulillah, we have been able to play all T20 World Cups so far. We are really looking forward to the upcoming edition. This is of course a big occasion for all three of us - me, Mushi and Shakib. We will definitely try to use our experience and knowledge and give our best shot in the World Cup.

The Daily Sun: You have a lot of experiences of playing in the ICC events in the past – six T20 World Cups, three 50-over World Cups and one Champions Trophy. However, the forthcoming World Cup is still different for you from other tournaments. You will be leading Bangladesh in an ICC event for the first time being the most successful captain in the format as well as having the experience of playing most T20I matches for your country and also scoring the highest number of runs for your side in the format. How motivating are all those things for you?

Mahmudullah: What you have mentioned is really satisfying for me. But actually, I don’t think much about those records. I tried my best to deliver when I was given responsibility. As the World Cup is coming and we, as a team, are in good touch, we will try to perform well in the tournament and take our improvement graph to the next level.

It’s true that these things really give inspiration. Representing your country for just a match is itself a very proud moment for any cricketer. By the grace of Almighty, I have played over 100 matches in this format for my country. But now we will have a big challenge in the T20 World Cup and as a team, we want to give our best performance and achieve something great.

The Daily Sun: Bangladesh have won nine out of their last 13 T20Is in the last three months. You have defeated Australia and New Zealand for the first time in a T20I match and also in the series. However, many feel that those wins won’t help you in the World Cup. What’s your thought on that?

Mahmudullah: It was really important for us to have a winning habit in this format. We have won matches by playing good cricket in the last three series and also won the series. Those who have made negative comments on our victories, I don’t think they really want the successes of our team. I think they envy the success of Bangladesh. I think every team uses their home conditions. So there was no point of negative comments on us. Yes, we played in such wickets which favoured the bowlers. But we should also give credit to our bowling unit because of their right executions on such wickets. And at the same time, looking at the pitches, it was similarly difficult for our batsmen as well as our opponents. It was a good sign that we overcame the challenges and were successful in winning matches. I think we deserve the credit for what we achieved.

The Daily Sun: The most worrying thing for your team is probably your batsmen’s off-form. What’s your take on that?

Mahmudullah: It’s really challenging to be consistent especially in the T20 format. Probably our batsmen had a tough time in the last few series but I’m still optimistic about our batting department. I think the players will be able to start performing when it is needed.

The Daily Sun: The team will have a week-long conditioning camp in Oman and also play two practice matches before going into the qualifiers of the World Cup. How crucial will it be for your side?

Mahmudullah: The preparation camp in Oman will be really vital. We will set our approach for the World Cup during the camp. The official practice matches are also important because everyone wants to have the winning momentum by their side whether it’s an official practice match or qualifying match or main match. We will definitely try to identify the conditions there and apply ourselves in such a way before going into the World Cup. 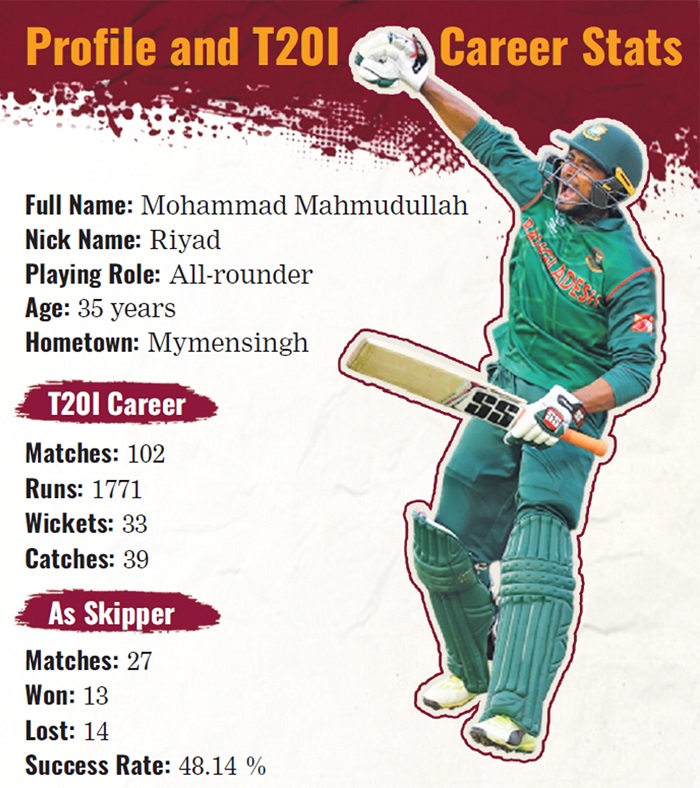 The Daily Sun: Both Shakib Al Hasan and Mustafizur Rahman are currently in the UAE and taking part in the Indian Premier League. Do you think their experience will help the side in the World Cup?

Mahmudullah: It’s a good sign that both Shakib and Mustafiz are in the UAE at the moment to take part in the IPL. Mustafiz is doing really well there. Shakib is not getting the opportunity to play at the moment but we all know about his capability. I think their recent experience and information will help us a lot when they will join us after completing the IPL stint and those will be very important for the team.

The Daily Sun: Bangladesh reached the final of the last Asia Cup and it was also played in the UAE back in 2018. Do you find it as an inspiration before going into the World Cup?

Mahmudullah: We played really good cricket throughout the Asia Cup in the UAE last time and also made it to the final. I think it will be encouraging for us this time in the World Cup.

The Daily Sun: Eight players in your team are going to play their first-ever T20 World Cup. What kind of expectations do you and the team management have from them?

Mahmudullah: I think everyone has expectations from these players – from the player himself to the team management and also the fans. I think they shouldn’t worry too much and concentrate on playing their natural cricket. If the young players can really do that by keeping the expectations aside, I hope that they will be able to bring great successes for Bangladesh in this World Cup.

The Daily Sun: Bangladesh are the youngest side by average age (26.87) in the forthcoming World Cup. How do you see it?

Mahmudullah: I don’t think age matters too much here. If someone can perform to his potentiality it will be good for his team.

The Daily Sun: Bangladesh won’t face any big team in the qualifiers but still we have many bitter experiences while playing against the minnows. How cautious are you about those matches?

Mahmudullah: Every match is important whether it is a qualifying round match or official practice match or main stage match. We will definitely try to see every match in the same way and are currently doing the same. We will be focusing on giving all the opponents their due respect and play our best cricket.

The Daily Sun: You have good memories as a player in the ICC tournaments. This time you will be also leading the side. What will be your personal target and your team’s target in the World Cup?

Mahmudullah: It’s really a good feeling that I did well for my team in the previous ICC events. This tournament is also a big challenge for me. In the recent series against Australia and New Zealand, we have discussed our performances in the last ICC T20 tournaments. I think when we get together again we will be discussing the same thing. I think we will definitely try to make sure we achieve better results than the past events.

The Daily Sun: Since beating West Indies in the maiden edition of World T20 in 2007, Bangladesh are yet to register a victory over a top side in the T20 World Cup. Do you feel that your team can break the duck this time around?

Mahmudullah: Inshallah, we are really looking to break the barrier and win as many matches as possible this time around.