Speakers at a roundtable on Saturday said academicians should conduct more research on Bangabandhu Sheikh Mujibur Rahman to keep the ideology of the great leader alive for future generation.

They also requested the bureaucrats and the writers to place correct information in contents on the father of the nation.

Marking the 47th anniversary of Bangabandhu’s Bangla speech at the United Nations, Bengali daily Kaler Kantho organised the discussion meeting at its head office in the capital’s Bashundhara Residential Area. After getting UN recognition, Bangabandhu delivered speech in Bangla at general assembly on September 25 in 1974.

Prof Syed Anwar Husain, Bangabandhu Chair at Bangladesh University of Professionals, said the country can’t achieve any goals without marching with the history.

“Bangabandhu was pioneer of language movement in 1952. He first raised voice against the bi-nationals theory of Jinnah. And began implementation of establishing a nation based on language and set an example by delivering UN speech in Bangla,” said Dr Anwar Husain.

“In present time, we found that the shadows of Pakistan still remain in the country. There is lack of stories on pre-liberation period in the academic text due to the communal mindsets of few people,” he said.

The jurist also mentioned Bangla language is facing challenges in legal space as most of the legal terms come from British colonial English, which are hard to translate in native.

Editor Imdadul Haq Milan requested researchers and writers to verify the information multiple times before publishing any piece on Bangabandhu or history of the country.

Cultural activist Pijush Bandyopadhyay said Bangabandhu placed the structure of future world in his visionary speech at UN while the developing countries also got support from the leader of Bangladesh. 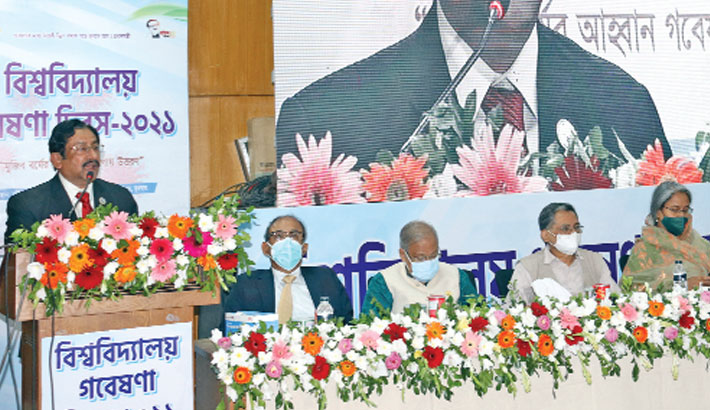