Modi fulfils promise he made to shuttler PV Sindhu, has ice-cream together

On Monday Indian Prime Minister Narendra Modi fulfilled the much-awaited promise, of having ice cream together, that he made to Olympic bronze medalist PV Sindhu. PM Modi had hosted a party for the Indian Olympic athletes at his official residence on 7, Lok Kalyan Marg.

Prior to the Indian contingent’s visit to Tokyo Olympics, PM Modi had interacted with the athletes via a video conferencing link. During his conversation with the ace shuttler, the Indian Prime Minister narrated how PV Sindhu was stopped from having ice creams prior to Rio Olympics. He had asked her whether she was going to refrain from having ice-creams even this time. PM Modi had emphasised how top athletes need to stick to a rigorous schedule and hard work regime.

PV Singh had then responded, “Since I am preparing for the Olympics, I have to do some sort of diet control. So I don’t eat ice cream so much, only once in a while.” The Prime Minister had promised her that they would have ice cream together after the competition ended.

While speaking to ANI on August 1, Sindhu’s father PV Ramana informed, “I think she’s coming on Aug 3. I’m planning to go to Delhi. We have to get as many medals as we can for country at Olympics. PM encouraged her & told Sindhu that we’ll eat ice-cream together after returning from Tokyo. Now, she’ll eat ice-cream with PM.”

PV Sindhu created history as she became the first Indian woman to win medals at two Olympic games. She won the Silver Medal in Badminton at the Rio Olympics in 2016 and won the Bronze Medal at the Tokyo Olympics. The ace shuttler defeated He Bingjiao of China 21- 13, 21-15 in the Bronze Medal match. After her historic win, PV Sindhu visited the Kanaka Durga Temple in Vijayawada on Friday to pray for Gold in the next Olympics.

Later, speaking to the media she said that she had set her eyes on the 2024 Olympics and she prayed that she could win the Gold medal for her nation. She also said that she visited the Durga temple before going to the Olympics and won the bronze medal with goddess blessings. After her historic victory, PV Sindhu went back to her hometown, Hyderabad, where she got a rousing reception from her family. 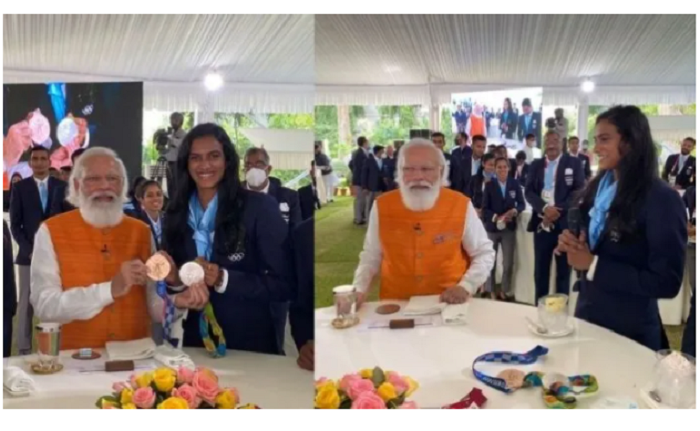 Modi fulfils promise he made to shuttler PV Sindhu, has ice-cream together