The government has set a target to vaccinate around one crore people through its weeklong countrywide vaccination campaign to start from August 7.

People will be able to get the vaccine from their wards at union council, municipalities and city corporations.

“Micro plan is being taken to conduct mass inoculation campaign against Covid-19 across the country from August 7. The preparation is going on full swing for the inoculation campaign,” Prof Dr ABM Khurshid Alam, director general of Directorate General of Health Services (DGHS) told the Daily Sun.

“Actually the vaccination is depending on availability of the vaccines as it is not fully confirmed which vaccine will arrive when,” the DGHS chief said.

Talking to Daily Sun about the countrywide ward level vaccination campaign, Prof Dr Robed Amin, spokesperson of the DGHS said “The coronavirus vaccination will be conducted as a weeklong programme in ward level across the country from August 7.”

“The weeklong vaccination in ward level will be run as a campaign in addition to the ongoing vaccination programme. The mass vaccination will be run with a target of inoculating around 27 lakh people everyday which will run three days in a week,” he added.

Prime Minister Sheikh Hasina reaffirmed her government's stance to ensure Covid-19 vaccine doses for all. "Whatever money is needed, no matter how many dose is required, we'll buy that….No one will be left out... we're procuring vaccines for all. Our vaccination programme will go on," she said on July 27.

Talking to reporters after a meeting held at the conference room of the Cabinet division, Home Minister Asaduzzaman Khan Kamal on July 27 said, “Vaccination centres will be set up in unions across the country before August 7. One can get vaccinated at the union level showing NID card,” he said.

The DGHS sources said the countrywide mass inoculation campaign will be run in three days between August 7 and August 12.

The DGHS sources said each vaccination team will be comprised of two vaccinators (a nurse and a sub assistant community medical officer) and at least three volunteers as around 40,000 vaccinators and around one lakh volunteers are getting necessary training to conduct the mass inoculation programme.

“People will get vaccine showing their National Identity (NID) card. Later, their necessary data will be put up in the national data server to provide vaccine certificate. However, who have registered online for the vaccine, they will get their vaccine certificate immediately,” an official of the DGHS said.

“The vaccines will be carried to vaccine centres from the upazila EPI store everyday as per demand,” said a DGHS official.

Talking to Daily Sun, ABM Khurshid Alam, chief of the DGHS said the health directorate has enough capacity to storage the vaccines in district and upazila level. “We have ultra cold storage to persevere 45 lakh vaccines and we have cold storage to preserve crores of vaccine,” he added.

The countrywide inoculation resumed on July 12 as administering Sinopharm vaccine started in upazila level across the country on the day.

Inoculation with Moderna vaccine also started in city corporation areas of the country on July 13. The Pfizer-BioNTech vaccine is being administered in seven hospitals of Dhaka city.

Earlier, the countrywide mass inoculation campaign resumed at all district hospitals and 40 centres in Dhaka city with Sinopharm vaccines on July 1.

The National Vaccination Programme against Covid-19 was started across the country with Oxford-AstraZeneca vaccine on February 7.

Later, on April 25, the government suspended the administering of the first dose with Oxford-AstraZeneca (Covishield) vaccine after India halted the export of the jab in March amid a massive rise in coronavirus infections in the neighbouring country.

Health Minister on July 24 said the government will receive around 21 crore doses of Covid-19 vaccines early next year to bring 80 percent of the country's population under vaccination coverage.

"Now Bangladesh's most important task is to collect vaccines. The government has now over one crore doses of vaccines in stock, while it will get two crore more by next month," he said.

The health ministry sources said government has lowered the age bar, from 30 to 25 years, for taking the Covid-19 jab. From now on anyone aged 25 and above can register for Covid-19 vaccine. Family members of the frontline workers who are above 18 years will get Covid jabs, the sources added. 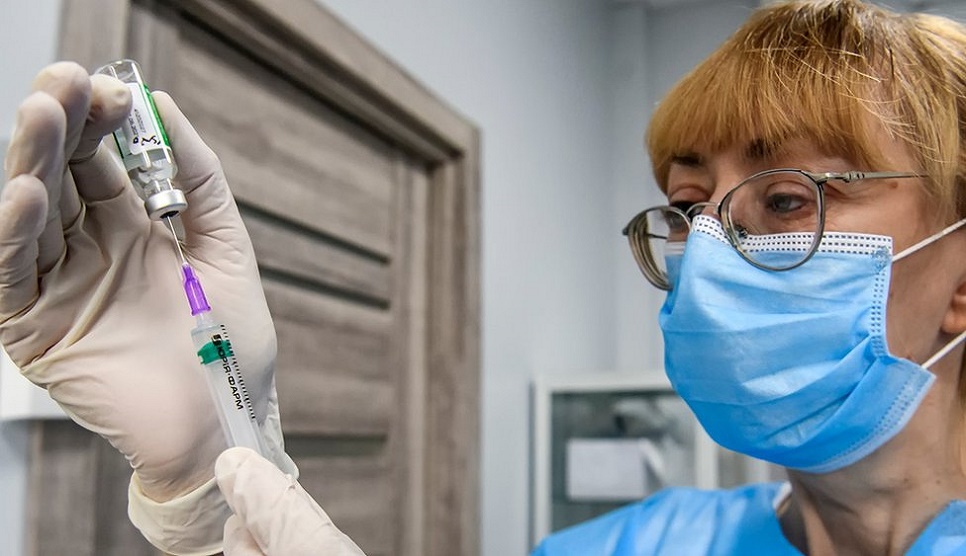