Islamabad : About 3.3 million Pakistani children are threatened by child labour that deprives them of their childhood, health and education, according to the United Nations International Children's Emergency Fund (UNICEF).

Mehmil Khalid, writing a blog post in Dunya News said that despite signing various international conventions and incorporating Sustainable Development Goals (SDGs) in its policy framework, the menace of child labour has not left Pakistan.

The exploitation of children in terms of physical, sexual, economic and emotional violence has been acting as a continuous impediment in their growth and development in Pakistan.

From a very early age, children indulge in rigorous domestic or industrial works to support their families. Poverty, lack of access to basic facilities and unregistered birth are some of the reasons for this issue that has been haunting Pakistan.

According to UNICEF, living a life of poverty bars them from enjoying what their other age fellows are having around the world. It was estimated that almost a quarter of women aged 20-49 were married before the age of 15, and 31 per cent before eighteen years of age.

Also, only 34 per cent of children under five are registered at birth nationally. The registration of birth is the fundamental right of children as it gives the legal proof of child's existence and identity and saves them from unjust social norms such as early marriages, wrote Khalid.

In Pakistan, despite observing UN Child Labour Laws, it has become a common sight to hire children for performing household chores especially young girls whom women find easy to get along with. They pay their parents heavily in return and sometimes bribe them who in the greed of wealth sign a lifelong pact with those families that enables them to earn a good source of livelihood, reported Dunya News.

Meanwhile, Pakistan passed a law under the Employment of Children Act 1991 that prohibits employing children under 14 years of age in unsafe and hazardous environments such as factories, carpet industries and mines


However, it is worth mentioning here that this piece of legislation only restricts child labour up to the age of 14. This harbingers the revisiting of the composition of this act and demands proper "definition of the child" in the constitution to escape any illegal future practice, says Khalid.

Furthermore, child labour is also present in various industries where the unscrupulous owners of the mills and factories employ young children and take from them heavy physical work that too on limited wages. In order to take maximum advantage of child labour, they convince their parents and the children that by doing such works they will be able to learn new skills that would be far better than what they acquire from school. Children bearing the onus of earning bread for their families succumb to their unfair dealings, leaving education and a bright career as their "unaccomplished belongings."

The forced child labour in Pakistan happens normally in the brick, carpet and coal industries. Children especially those working in carpet factories sometimes work up to 20 hours a day, seven days a week, and often sleep and eat at their place of work. Many children gain problems with eyesight and lung issues due to regularly working in dusty surroundings, reported Khalid.

Khalid advised the Pakistani Government to implement the legislation to meet the national and international standards. Experts urge the state to ban domestic child work and plan to assign a proper age of employment in the constitution especially the minimum age of hazardous work that still does not meet international standards. They reiterate that the birth of a child should be registered, and stern action should be taken against the families who show negligence in this regard. 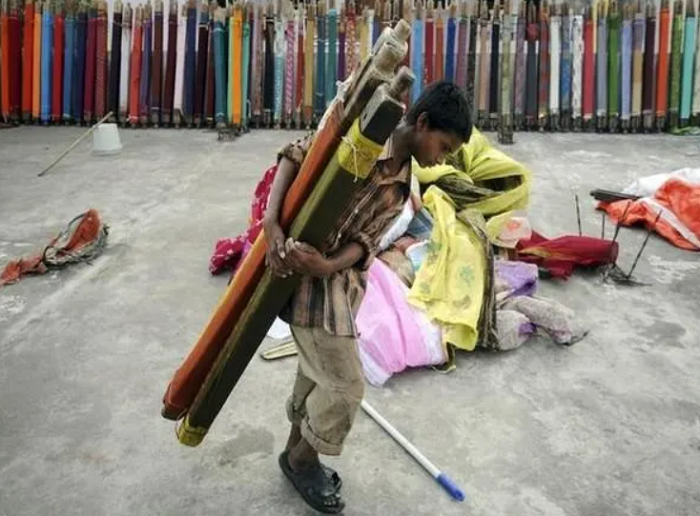