LAHORE: Citizens from all walks of life and various age groups gathered at Liberty Roundabout on Saturday to protest the rising incidents of violence against women across the country and demand safety for women and gender minorities.

Organised jointly by the Aurat March, the Haqooq-i-Khalq Movement and the Progressive Students Collective, the protest was held to press the state to assume its responsibility to protect its people, especially women and gender minorities who are constantly facing violence in one form or the other and often end up being murdered. They also demanded the government pass the domestic violence bill in its current form and resist any pressures over it.

In her speech, Mohiba Ahmed from the students’ collective stressed the need to stop victim blaming and hold perpetrators accountable. “We are tired of explaining this day in and day out. You (government) had to pass one bill against domestic violence but you keep delaying that too. All this violence that women face is evident of the deep-rooted fascism and misogyny in society,” she stressed and also mentioned the ‘early’ release from jail of the attacker of lawyer Khadija Siddiqui.

All the speakers came down hard on him over his repeated victim blaming and questioning of a rape victim’s choice of clothes.

Dr Alia Haider spoke about the pent up anger within women because of the barbarism they faced, mentioning murders of Quratulain, Saima and Noor that have been trending on social media. She also denounced the misogynistic comments made on TV by writer Khalilur Rehman Qamar, analyst Orya Maqbool Jan, federal minister Ali Amin Gandapur and other politicians.

“Women are considered a liability. They are targeted through karo kari, vani, other tribal customs, and abuses are also targeted towards women. We want to feel safe in public places, our homes and even among friends. Women need to be given their basic rights and freedoms,” she added.

Sara Kazmi, a student, then sang a song, ‘Auratain uthi nahi tau zulm barhta jaye ga’ (If women don’t rise now, atrocities against them will only get stronger), which originated in India in 2019 to denounce the violence against women there.

Lubna, a woman from Chungi Amar Sidhu, raised the issue that women were always questioned what freedoms they wanted despite daily reports of violence – inside homes, workplaces and public spaces. She said a woman was beaten up or even murdered for asking for her right to inheritance, and expected to look after their families and handle domestic chores even after toiling out of the house all day. “Why can’t men share the household work? Why can’t the kitchen jobs be divided?” she questioned.

Transgender community representative Zanaya Chaudhry also spoke on the occasion, highlighting the violence they faced and successive governments’ lip service for the community. 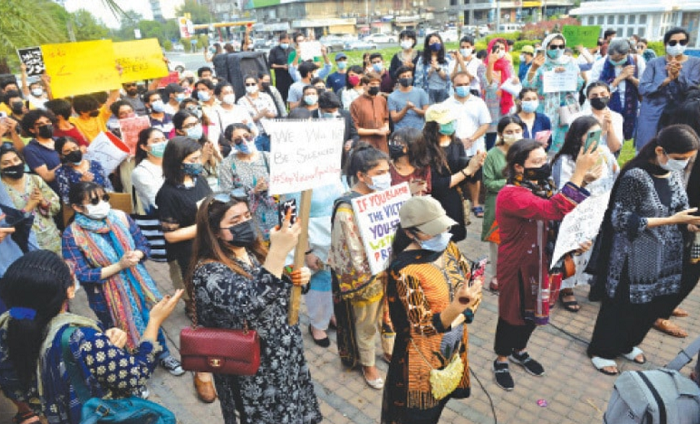