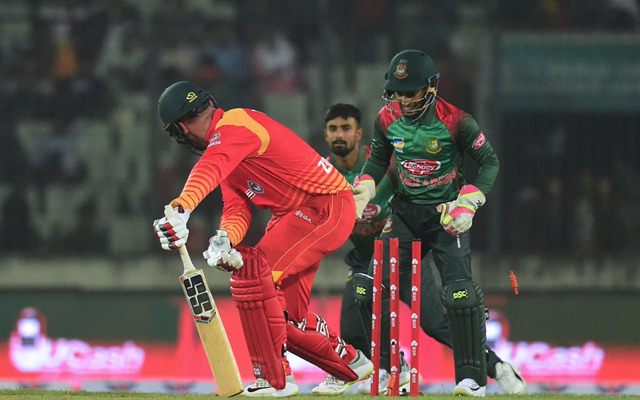 Zimbabwe won the toss and elected to bat first against Bangladesh in the first of three-match T20 International series at the Harare Sports Club on Thursday.

The match starts at 4.30 PM as per Bangladesh Standard Time and is being aired live on Gazi TV and T Sports.

The match is the Bangladesh’s 100th in this format which they want to make memorable with a victory.

Bangladesh incidentally played their first T20 matches against Zimbabwe under the captaincy of Shahriar Nafees in 2006 and won the game by 43 runs. Mashrafe Bin Mortaza was adjudged man of the match in that game.

The Tigers played three matches in this year, all against New Zealand at away and lost all three matches. The 100th match also opened the door for them to end the win-drought in this format this year.

Bangladesh had already won the one-off Test and as it was expected they inflicted a whitewash on Zimbabwe in a three-match series, showing absolute domination.

This was the sixth time that Bangladesh whitewashed Zimbabwe in ODI series but first at their own den. Bangladesh lost the ODI series to Zimbabwe the last two times they visited the country.

Overall it was Bangladesh’s 15th incident of whitewash in their history—amongst which 12 came against Test nations and the rest of the three were against ICC associate nations.

However, emboldened by their recent record against Zimbabwe, Bangladesh are determined to whitewash Zimbabwe in the T20 International series too. If they can win three matches in row, they will earn the distinction of completing a tour sweep on Zimbabwe for the first time.

Bangladesh’s T20 record however didn’t speak a volume of them even though they have the upper-hand over the Southern African nation in this shortest format of cricket too.

The two teams so far faced off against each other 13 times and Bangladesh won nine matches in contrast to experiencing defeat in four matches. Last time when Bangladesh visited Zimbabwe in 2013, they drew the two-match series by 1-1.

Overall Bangladesh played 99 T20 Internationals and won just 32. They had lost a staggering number of 65 matches while two matches fetched no result.