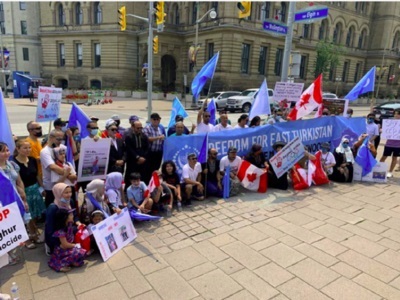 More than 200 people across Canada joined a rally outside Prime Minister Justin Trudeau's office in Ottawa to call the Canadian government to take action to stop the Uyghur genocide. The protest occurred on Sunday and was joined by women and children.

An Uyghur Muslim, Bilal Malik, completed his 15 days March to Ottawa and reached the PM office to deliver a joint letter signed by various organisations.

They urged the Canadian government and Olympic committee to boycott the Beijing 2020 Olympics.
This Protest was also against the 33 Canadian senators' decision to not recognise the Uyghur genocide in China.

A protester said, "We are here to tell them what they are doing is unacceptable as Canadians. They have to remember, Canada not only has a moral obligation, at the same time Canada has legal obligation to stand up and stop ongoing genocide".

33 Canadian Senators voted against a bill brought forward by senator Leo Housakos that calls on the Senate to recognise China's genocide.

Independent Senators Group (ISG) leader Yuen Pau Woo said in the Senate on June 28 that Canada should avoid criticizing China for its human rights abuses against Uyghurs and other Turkic Muslims because our country has been mistreated, indigenous people.

As Canadians, the protesters stressed that because Canada mistreated indigenous people in the past, Canada is obligated than any other country in this world not to allow these kinds of genocidal acts to happen ever again anywhere.