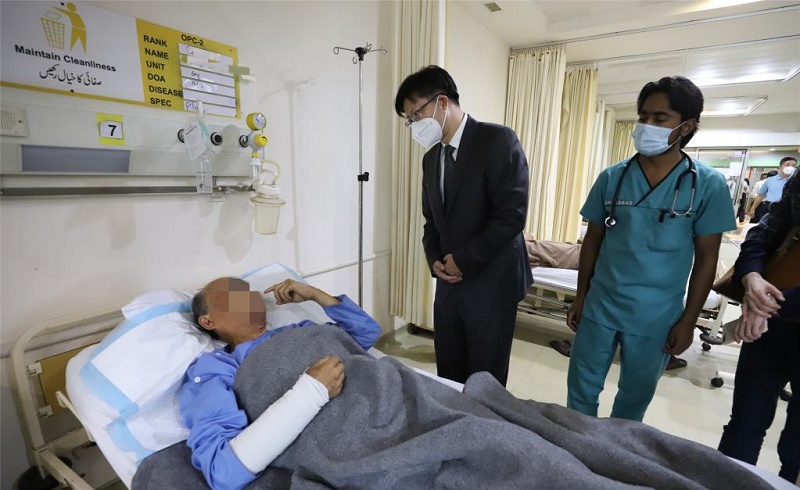 Zhao said the Chinese government had paid a great deal of attention to the attack on Chinese personnel on Wednesday.

According to a continuing investigation and information from Pakistan there had been a terrorist attack against Chinese personnel in the country, Zhao said.

China strongly condemned any organization and personnel that carried out the atrocity, he said, adding that the Chinese Ministry of Public Security had sent criminal investigators to Pakistan to help with the investigation.

Zhao said he hoped China and Pakistan would work together to find out who was responsible for the attack, track them down and severely punish them.

He urged Pakistan to identify security risks facing Chinese personnel, institutions and projects in Pakistan, fix loopholes, strengthen the country's early-warning system and security measures, and do its utmost to ensure the safety of Chinese personnel to prevent similar attacks from happening again.

China and Pakistan are all-weather strategic cooperative partners, Zhao said, and he trusted that law enforcement departments of both countries would further strengthen the building of mechanisms for collaboration and work more closely together for the benefit of both sides.

Rashid strongly condemned the terrorist attack on behalf of Pakistan's Prime Minister Imran Khan and all Pakistanis, saying he would go to the scene to oversee the investigation.

Pakistan will take the highest level of security measures to ensure the safety of Chinese personnel and institutions in Pakistan, he added.

Also on Saturday, a joint working group to Pakistan, together with staff of the Chinese embassy on Saturday expressed their condolences over the deaths of the victims.

At the scene in Khyber Pakhtunkhwa Province, Wu Wei, deputy director of the Department of External Security Affairs of China's Ministry of Foreign Affairs who leads the joint work team, along with Nong Rong, the Chinese ambassador to Pakistan, paid their respects.

Wu said as constructors of a new generation of friendship between China and Pakistan, their "blood and sweat" will not be forgotten by history.