No Do-Overs in Afghanistan: The U.S. Cannot Re-Enter Once It Leaves 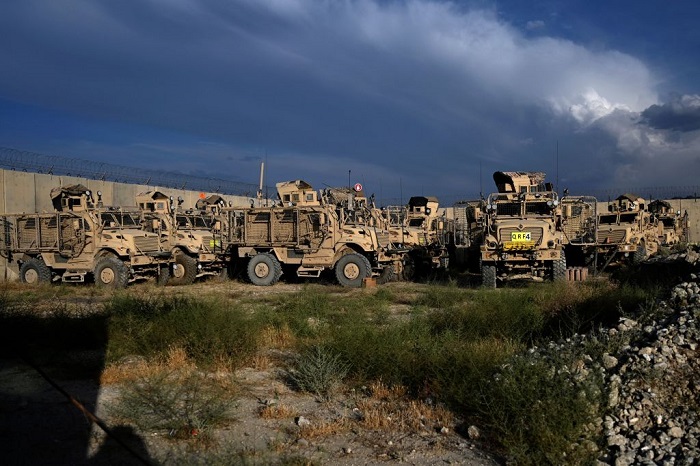 Unlike Iraq, the U.S. cannot reenter if the security situation collapses in Afghanistan – and President Joe Biden now owns the precarious and alarming situation there.

As President Joe Biden nears the August deadline he set to withdraw troops from Afghanistan, one critical feature of the drawdown has become clear: he now owns the precarious situation there, and there's no turning back.

This defining moment for Biden's legacy has been met with growing speculation that the U.S. may have to return to its longest war zone as the Taliban continues to take ground, execute America's local allies and, many fear, position itself to overrun the U.S.-backed government in Kabul.

But the situation on the ground, along with the domestic appetite for furthering U.S. conflicts abroad, make that impossible. Political and logistical realities have shifted dramatically in and around the country, and other powers in the region, namely Russia and China, are actively working to prevent the U.S. from ever re-entering.

But the main obstacles reside at home, chiefly in an administration led by Biden that has stated it has no intention of returning.

Rep. Adam Kinzinger, an Air Force veteran who flew missions over Afghanistan, was among the congressional leaders in recent days speculating that the U.S. "may have to go back now," as he told NBC's "Meet the Press," days after the Biden administration ordered the sudden shuttering of the principal – and last – U.S. military hub at Bagram airfield.

When asked subsequently about the challenges of returning, he offered a more somber assessment.

"The U.S. has the capability to do anything," Kinzinger, the Illinois Republican, tells U.S. News. "But it would be a near impossible situation."

Many of those who spoke with U.S. News about America's future with regard to Afghanistan note the common assumption that, like in Iraq in 2014, the U.S. could return to a faraway battlefield years after leaving it to address new threats – in that case, the sudden and dramatic rise of the Islamic State group. That possibility is particularly prevalent in Afghanistan given the recent surge in activity by al-Qaida and other terrorist groups.

But Iraq is surrounded by U.S. allies, key logistics hubs that remain in American use and borders on a NATO ally, Turkey. Almost all of its neighboring countries – alarmed by the bloody dangers the Islamic State group posed – either supported the U.S. decision in 2014 to return with military force or at least did not oppose it.

In this context, Iraq could not be more different from Afghanistan.

"The neighbors don't want us to come back," says Sajjan Gohel, international security director at the London-based Asia-Pacific Foundation and an expert on the decades-long NATO presence in Afghanistan.

Russia is currently holding drills in Tajikistan on Afghanistan's northern border ostensibly to prepare for potential security threats posed by the Taliban, which in recent weeks has prioritized securing border crossings. However, multiple officials who spoke with U.S. News confirm the U.S. believes Moscow is actually exerting pressure on its former Soviet ally not to cooperate with American efforts to establish a new counter-terrorism base that would allow the U.S. to operate in Afghanistan without having to maintain a presence there outside the embassy. Defense Secretary Lloyd Austin and Secretary of State Antony Blinken have traveled to Tajikistan and other nearby countries in recent weeks as a part of this effort to allow the establishment of a new U.S. base, though that optimism has waned as administration officials now emphasize America's ability to operate "beyond the horizon" without nearby support.

Similarly China has stepped up its pressure on Pakistan, following a years-long campaign of bringing Islamabad closer into alignment with Beijing's intentions for the region – all at America's expense. And Chinese officials are planning trips to other nearby countries the U.S. is currently courting to, as its state media service stated on Saturday, not only "help further subdue the chaos left by the power vacuum in this country, but will also push ties between China and other Central Asian countries closer."

"The perspective of Russia, Pakistan, China, Iran is, why would they want the U.S.to come back?" Gohel says. "Their goal is to make it as difficult as possible."

Retired Army Gen. Joseph Votel was among the first Americans on the ground in Afghanistan in October 2001 when, as a colonel leading 200 Army Rangers, he parachuted from a plane that had traveled through Pakistani air space onto an objective near the Taliban stronghold of Kandahar.

"It does not seem likely that we would return to Afghanistan anytime soon," says Votel, whose subsequent leadership positions included overseeing the shadowy Joint Special Operations Command, all special operations forces and ultimately all U.S. troops in the Middle East before he retired in 2019. "It will take a lot to get us back there."

Physically getting U.S. forces into Afghanistan and sustaining them logistically has always posed serious challenges, even when the military could rely on overland routes through Pakistan and a collection of other military corridors known as the "Northern Distribution Network." At the height of the U.S. war there, that network flowed through former Soviet states that border Afghanistan, into Russia and ultimately to the Caspian or Baltic seas, and played a critical role the last time the U.S. tried to withdraw fully from Afghanistan in 2014.

Neither of those logistics routes are practically reliable now following two decades of fraying relationships between Washington and Islamabad – chiefly over support for the Taliban from elements of its army and intelligence services – and Moscow since its annexation of Crimea in 2014 and ongoing support for pro-Russian separatists there.

Votel, who as U.S. Central Command chief helped oversee the U.S. return to Iraq in 2014, notes that that re-invasion took place three years after America's military departed the country and only after it faced serious and persistent threats to its own interests. These included the potential for attacks on the embassy in Baghdad, the collapse of the local security forces and the widely publicized executions by Islamic State group fighters of American and Western hostages.

But mainly, as Votel and other current and former officials point out, the Biden administration has stated it has no plans to return to Afghanistan.

Indeed, when asked last week whether the U.S. military had the capability to return to Afghanistan should it need to, Pentagon spokesman John Kirby declined to comment on what he called a hypothetical question, saying the military was focused on "transitioning to a renewed relationship with Afghan forces."

"And, again," Kirby added, "the president has been very clear that we are going to maintain and retain a counterterrorism capability commensurate with whatever threat might emanate out of Afghanistan toward the homeland."

"That we have now and we'll continue to pursue robust over-the-horizon abilities to meet that commitment," he said.

Biden himself stressed his commitment to his decision days later, saying in a high-profile speech on July 8, "it's the right and the responsibility of the Afghan people alone to decide their future and how they want to run their country."

That reality does not appear to be shifting, even as the Taliban builds upon the dramatic gains it has made across vast swathes of Afghanistan at a stunning rate.

"President Biden has been clear about his disdain for the war and the military has nearly completed its withdrawal," says Bill Roggio, an author of the Foundation for the Defense of Democracies' Long War Journal, which documents the Taliban's gains.

Biden has justified his decision to withdraw by saying he is following through on an agreement signed with the Taliban in Doha, Qatar, in 2020 by his predecessor, President Donald Trump, which was made without input from the U.S.-backed government in Kabul. It originally called for a full U.S. withdrawal by May of this year, which Biden pushed back to its current deadline of late August.

Regardless of who else he might blame for the outcome in Afghanistan, Roggio says, it's absolutely clear that Biden now owns whatever happens there.

"He was not obligated to stick by President Trump's catastrophic deal with the Taliban, which Biden himself has called a 'bad deal,'" Roggio says. "Biden has opted out of other foreign policy decisions implemented by Trump. Biden merely used the Doha agreement as an excuse to justify his preferred policy of leaving Afghanistan."

As of last week the military had completed 90 percent of its withdrawal.

"Re-engaging in Afghanistan would be a clear admission of failure," Roggio adds. "And I doubt President Biden is willing to admit that."