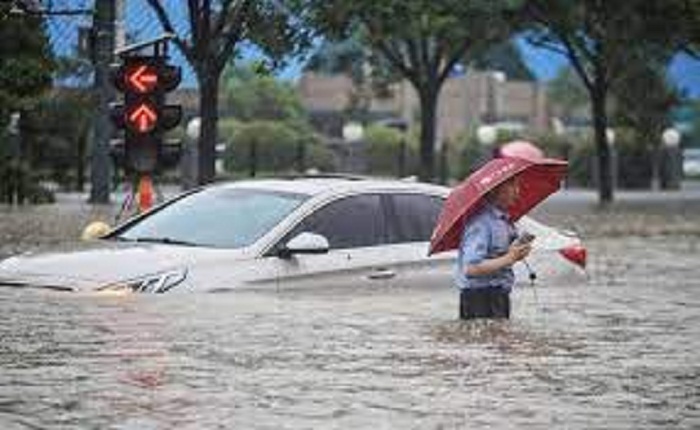 Around 100,000 people have been relocated from a central Chinese city known as the world's biggest production base for iPhones, after record rainfall led to widespread floods and the death of at least 12 people.

The deluge on Tuesday was equivalent to more than 8 months' worth of the city's average rainfall, making the event another example of extreme weather that many scientists contend is being exacerbated by the impacts of climate change. Heatwaves have struck the U.S. and Canada in recent months, while Europe and India have suffered major floods, Siberia has experienced wildfires and drought has gripped parts of Africa and Brazil.

"Climate change has made extreme weather like heat waves and floods more frequent and more deadly in the past 20 years," said Greenpeace East Asia climate and energy campaigner Liu Junyan. Recent events in Henan, along with North America and Europe "are all wake-up calls reminding people of the climate change crisis," she said.

Zhengzhou saw 457.5 millimeters (18 inches) of rain fall in the 24 hours through 5 p.m. on Tuesday, the highest since records began for the city of more than 10 million people, the official Xinhua news agency reported. That included a record 201.9 millimeters in a single hour, from 4 p.m. to 5 p.m, a record for mainland China. Zhengzhou typically receives average annual precipitation of about 640.8 millimeters.

Henan is one of China's biggest wheat-producing areas and a major manufacturer of machinery, while Zhengzhou is home to the largest iPhone-making plant, owned by Taiwan's Hon Hai Precision Industry Co. The flooding struck just as the company, known also as Foxconn, prepares to ramp up output ahead of the launch of Apple Inc.'s latest devices toward the end of the year.

Hon Hai's plant in Zhengzhou receives components needed to assemble iPhones from global and domestic Chinese suppliers before shipping out the finished producers. A representative for Hon Hai said it was looking into the situation.

Henan is also China's second-largest food supplier, accounts for about a quarter of the country's wheat harvest and is a major center for frozen food production. It is also a key hub for coal and metals.

While China has already harvested its main wheat crop, earlier widespread rains impacted quality from areas including Henan. That is expected to drive up wheat imports by as much as 40% this year to the highest level since the mid-1990s, according to Bric Agriculture Group, a Beijing-based consulting firm. China has increased purchases from the U.S., Canada and Australia this year.

Pictures published by state media showed large sections of Zhengzhou roads submerged, while videos posted on social media depicted passengers having been in flooded-out subway cars with water levels up to their shoulders, residents pulled to safety with ropes from fast moving floodwaters, and cars washed along inundated highways.

Xinhua cited authorities in Henan as saying 12 deaths had been confirmed as of Wednesday morning local time. Thousands of rescue workers including soldiers and firefighters have been dispatched to the city, it added.

In Henan province's Luoyang city, a dam is at risk of collapsing, the People's Liberation Army said Wednesday in a post on Weibo. At Zhengzhou, the Guojiazui water reservoir is also posing a major safety risk and nearby residents have been evacuated, according to a statement on the Henan government's website.

Heavy rain had already forced Henan last week to start banning exports of its coal supply to other areas, amid concern over energy supplies.