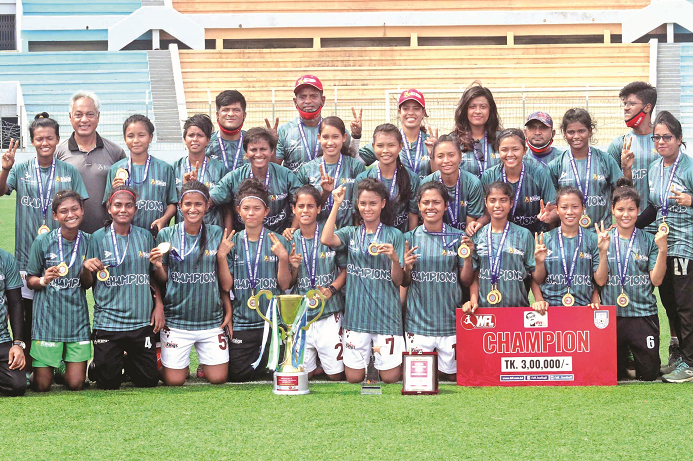 Bashundhara Kings finished their 2020-21 Women’s Football League campaign with an all-win record after thrashing Nasrin Sports Academy by 16-0 goals in their last match of the league at the Birshrestha Shaheed Sipahi Mostafa Kamal Stadium in Kamalapur on Monday.

Among others, defender Shamsunnahar Jr, forward Summya Matsushima, midfielder Maria Manda scored one each in a season where Kings scored a total of 123 goals and conceded just one goal.

“This year we formed a better team than last year. Our target was to score 150 goals, but we have just 123. However, we are happy to retain the title for the second time,” Kings coach Abu Faysal Ahmed told The Daily Sun.

“The league was more competitive than last year. There were one or two teams who also did really well throughout the league,” he added.

Kings earlier confirmed their second successive WFL title after clinching a massive 18-0 victory over Jamalpur Kacharipara Akadas at the same venue on Saturday.

Forward Krishna, who completed her 50th goal for Kings on Monday, finished the league as the top scorer with 28 goals while their captain Sabina, who scored 35 goals last year, finished second with 27 goals this year.

The league earlier kicked off on March 31 with the participation of eight teams. Kachijhuli Sporting Club, however, got suspended from the league for breaching the disciplinary code during the second phase of the league and their all opponents were awarded a 3-0 goals win afterwards.

In the day’s other matches, ARB CSC beat FC Brahmanbaria by 8-2 goals while  Jamalpur Kacharipara Akadas beat Saddapuskuruni Jubo SC by 5-0 goals at the same venue.