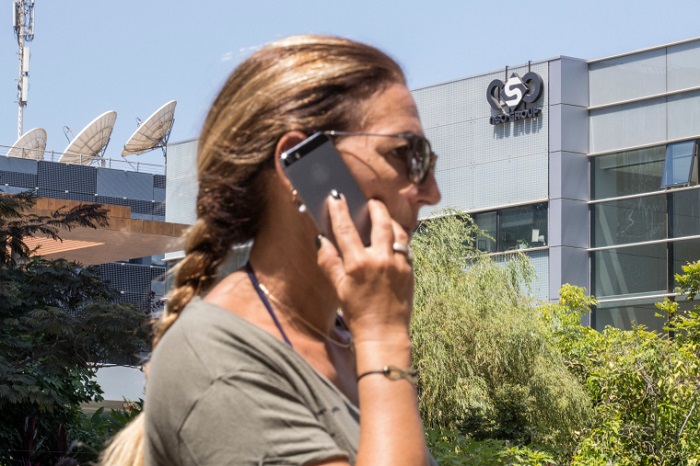 In this photo from August 28, 2016, a woman uses her iPhone in front of the building housing the Israeli NSO Group, in Herzliya, near Tel Aviv. Investigative reports say government clients of the company's Pegasus spyware have been linked to phone numbers of at least 180 journalists around the world, suggesting they were possible surveillance targets. (AFP/Jack Guez)

In response to reports that at least 180 journalists were identified by investigative reporters as possible targets of Pegasus spyware, produced by the Israeli company NSO Group, the Committee to Protect Journalists reaffirmed its call for immediate action by governments and companies around the world to stem abuse of powerful technology that can be used to spy on the press.

“This report shows how governments and companies must act now to stop the abuse of this spyware which is evidently being used to undermine civil liberties, not just counter terrorism and crime,” said Robert Mahoney, CPJ’s deputy executive director. “No one should have unfettered power to spy on the press, least of all governments known to target journalists with physical abuse and legal reprisals.”

The reporting, known as the Pegasus Project, was conducted by a consortium including investigative journalism nonprofit Forbidden Stories and global media outlets such as The Washington Post. Amnesty International, which performed technical analysis, reported that more than 180 journalists had been identified by the consortium on a list of 50,000 phone numbers allegedly linked to clients of NSO Group technology. In a statement emailed to CPJ, an NSO spokesperson said there was nothing to link the 50,000 numbers to NSO Group or Pegasus. In a rebuttal published online, the company said the consortium’s allegations were false.

NSO has repeatedly told CPJ in the past that it licenses Pegasus to fight crime and terrorism. The July 19 statement said its products were “sold to vetted foreign governments.”

“NSO Group will continue to investigate all credible claims of misuse and take appropriate action based on the results of these investigations,” it said. “This includes shutting down of a customers’ system, something NSO has proven its ability and willingness to do, due to confirmed misuse, has done multiple times in the past, and will not hesitate to do again if a situation warrants.”

CPJ has issued recommendations to policymakers and companies to combat spyware abuse against the media.