England leave Pakistan in a spin to level T20 series 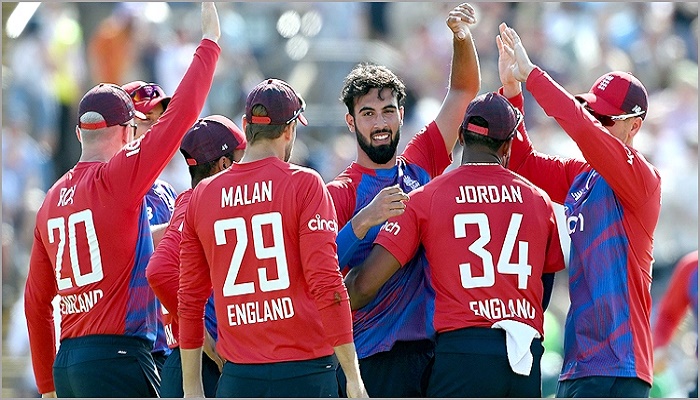 England's spinners took centre stage during a 45-run win over Pakistan in the second Twenty20 international at Headingley on Sunday.

Victory saw England level the three-match series at 1-1 ahead of Tuesday's finale at Old Trafford.

The hosts' decision was vindicated by the leg-break duo taking a combined 3-55 from eight overs, with player of the match Moeen adding 2-32 to his useful 36 in England's total of 200.

That proved more than enough for England to defend, with Pakistan finishing on 155-9.

Jos Buttler, captaining England in place of the rested Eoin Morgan, marked his return to international duty by top-scoring with 59.

Moeen praised Buttler's faith in spin bowling by saying: "I don't think it was a game plan, it was just Jos playing the conditions.

"I don't think it was risky at all. Today it was great conditions to be a spinner."

He added: "I thought our leg-spinners bowled fantastically well, Parky and Rash complemented each other brilliantly.

"They're both very different but both very skilful."

"It was huge," said Moeen. But I've seen him do that a couple of times now.

"I played with him in (South Africa's) Mzansi Super League and he hit one out of Johannesburg!"

Buttler fell when he drilled a catch to mid-off with Livingstone's innings ending on 38 thanks to a needless run out.

Pakistan captain Babar Azam and Mohammad Rizwan shared an opening stand of exactly 50 before the skipper was caught at mid-off after driving at paceman Saqib Mahmood.

Rashid struck on his Yorkshire home ground when he had Sohaib Maqsood stumped by Buttler before a brilliant one-handed caught and bowled accounted for Rizwan.

With the tourists falling behind the run-rate, Moeen had Mohammad Hafeez caught in the deep by Jonny Bairstow before clean bowling a charging Fakhar Zaman.

Parkinson had a deserved wicket when Azam Khan became Buttler's second stumping of the innings before Mahmood took his figures to 3-33 by bowling tailender Rauf for a duck.

"We were trying to chase. After six overs, we couldn't continue the partnership and lost wickets."