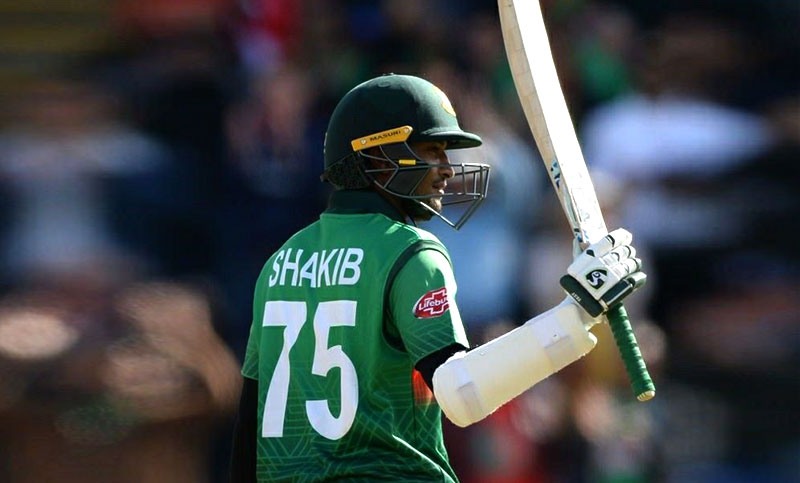 Shakib Al Hasan demonstrated an all-round performance to help Bangladesh clinch a three-wicket win over Zimbabwe in the second one-day international to complete their series win against the hosts in Harare on Sunday.

Shakib, who previously failed to shine with the bat since his comeback in competitive cricket last year after serving one year ban, struck an unbeaten 96 off 109 balls that guided Bangladesh to reach 242-7 in 49.1 overs after the hosts set them a target of 241 runs at Harare Sports Club.

Pace-bowling all-rounder Mohammad Saifuddin (28 not out) gave Shakib ample support in the chase as the pair added 69 runs for the eighth wicket to guide their side to victory after they were reduced to 173-7 in 38.3 overs.

Pacer Shoriful Islam earlier finished with the career-best bowling figure of 4-46 while Shakib claimed 2-42 as Bangladesh restricted Zimbabwe to 240-9 after the hosts opted to bat first.

Bangladesh had found their back against the wall in the chase when they lost Mosaddek Hossain (five) in the 18th over after he had a childish mix-up with Shakib that reduced the Tigers to 75-4.

Shakib and Mahmudullah then rebuilt the innings with a 55-run stand for the fifth wicket but the host pacer Blessing Muzarabani broke the partnership by dismissing the latter on 26.

Bangladesh then lost Mehidy Hasan (six) and Afif Hossain (21) in quick succession that raised the fear of ending their 17-match winning streak against Zimbabwe in ODIs but experienced Shakib and youngster Saifuddin’s unbroken stand confirmed their victory with five balls to spare.

The victory also ensured Bangladesh’s first ODI series win in Zimbabwean soil after 2009 and it’s only the third time in eight attempts Bangladesh were successful to win an ODI series in Zimbabwe after 2007 and 2009 respectively.

Zimbabwe, who lost both their openers early, were brought back in the game after Brendan Taylor struck 46 runs but his innings came to end comically as he hit the stumps on his follow-through off pacer Shoriful.

Middle-order batsman Wesley Madhevere then struck the highest 56 runs while Dion Myers and Sikandar Raza made 34 and 30 runs respectively to help the hosts post a challenging total on board.

Bangladesh openers – Tamim Iqbal and Liton Das started cautiously in the chase but they departed in quick succession after making 20 and 21 runs respectively.

Mohammad Mithun (two) and Mosaddek failed to live up to the expectations of the team management again and their untimely dismissals only put Bangladesh on the back foot before Shakib showcased his class to give the Tigers a close win to complete the series win.

The dead rubber third ODI will be held at the same venue on Tuesday.