Egyptian vulture spotted in Ireland for the first time 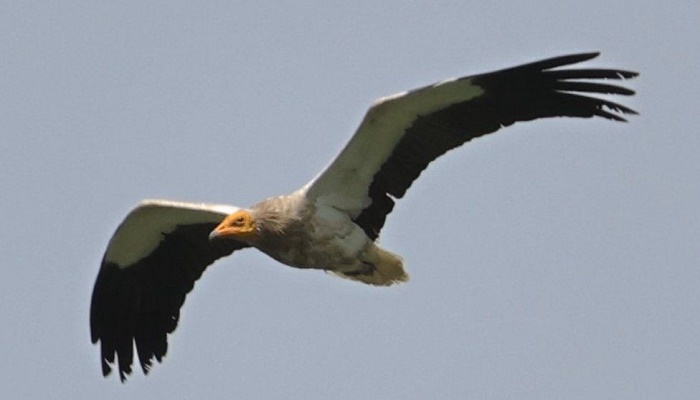 A rare Egyptian vulture has been spotted circling the skies above the village of Dunfanaghy, County Donegal.

It is the first time the species has been recorded anywhere on the island of Ireland.

Bird watchers have been flocking to the area to catch a glimpse of the raptor, believed to be the same bird seen on the Isles of Scilly in June.

Listed as endangered since 2007, the Egyptian vulture is in decline worldwide.

It is the only long-distance migratory vulture.

Its migratory range usually stretches from Bangladesh to west Africa and it can be found in parts of southern Spain and northern France.

It is perhaps understandable that Shane Farrell, from Dublin, was surprised to encounter one in Donegal.

Mr Farrell was the first to set eyes on the bird and said the experience "still hasn't sunk in".

He was looking for orchids among the dunes and lakes around Dunfanaghy when the vulture flew across a field towards him.

"Usually there is is a sense of elation when you spot a rare bird," he told BBC News NI.

"But this was too far into the realms of fantasy to feel anything other than confusion."

He initially thought the bird must have escaped from captivity but closer examination of missing tail and flight feathers revealed it to be the same vulture seen on the Isles of Scilly.

Before the bird was spotted on the Isles of Scilly in June, there had only been two previous sightings officially recorded in the UK - one in Somerset in 1825 and another in Essex in 1868.

Niall Hatch, from conservation group Birdwatch Ireland, said the north coast of Ireland was "the last place you would expect to see an Egyptian vulture".

He said it was hard to know how the bird, which has a wingspan of nearly 2m (6ft 7in), travelled from the Isles of Scilly to Donegal without anyone spotting it.

"It would be quite substantially larger than any other bird in Ireland and has highly distinctive markings," he said.

"Also, they don't like to fly over large expanses of water, moving over land as much as possible."

Mr Hatch said it was possible the vulture escaped detection by cruising at extremely high altitudes.

Word of the sighting travelled fast and bird watchers from across the UK and Ireland soon descended on the area.

Mike McLaughlin, a birdwatcher from Banbridge, County Down, said some people had made extraordinarily long journeys to catch a glimpse of the vulture.

"There were people there from Cork, Kerry, Wicklow - there was even a group who had travelled across from Hampshire as soon as they'd heard," he said.

Mr McLaughlin said that in spite making its audience wait wait a few hours the vulture eventually put on a good show.

"It flew directly over our heads," he said.

"There were oohs and ahs and we all got a good look - it was very exciting."