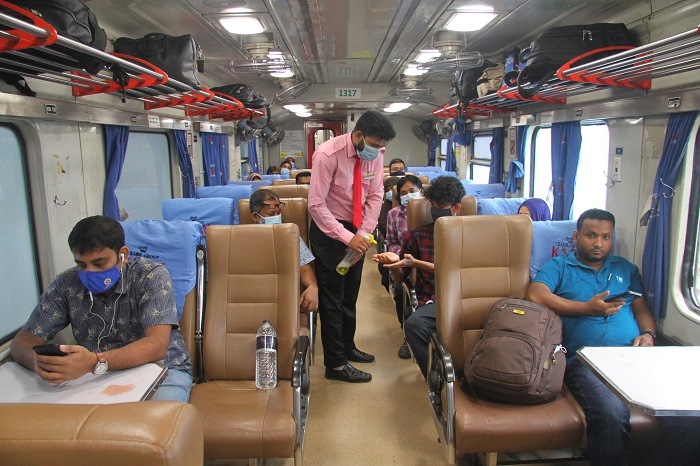 As the Eid-ul-Azha festival is nearing, people were found scrambling for vehicles on Saturday on roads, highways and ferry terminal to reach their destinations.

Shortly after the Covid-19 lockdown was relaxed on the occasion of the Eid, people are leaving the capital for their native homes to celebrate the religious festival with their near and dear ones.

Bus and launch terminals were crowded with passengers. Many of the home-goers did not wear facemasks.

There was no vacant seat in most buses and launches though the government directed the operators to run vehicles at half capacity. A few bus operators were following the instructions.

The buses remained stuck in long tailbacks on highways for hours after leaving the capital. Officials said a huge rush of vehicles caused the gridlock.

The situation at the railway stations was comparatively good. Trains left the capital's Kamalapur station with half of their seats vacant.

Thousands of people from different corners of the country’s South and South-Western regions are thronging Shimulia in Munshiganj, Paturia in Manikganj, and Sadarghat launch terminal in Dhaka for the third day of the relaxed restriction on Saturday.

As the numbers of travellers and vehicles were increasing, long tailbacks were created on both sides of the Padma River on Saturday.

Huge crowds were also seen at the ferry terminals on Shimulia-Banglabazar and Paturia-Daulatdia routes. People go to 21 southern districts from Dhaka through the routes.

Whenever a ferry reached Shimulia ferry terminal in Munshiganj, passengers jostled for boarding the vessel as the authorities apparently turned a blind eye to ensuring physical distancing.

The situation was almost similar at Paturia terminal in Manikganj.

A good number of Dhaka-bound trucks laden with goods and sacrificial cattle was stranded on Daulatdia and Kathalbari to cross the river.

Thirteen ferries and 83 launches were operating on Shimulia-Banglabazar point from the terminal on Saturday, according to Bangladesh Inland Water Transport Authority (BIWTA) sources.

Claiming the launches were carrying people at half capacity, BIWTA’s Shimulia Ghat Naval Inspector Md Solaiman said magistrates and law enforcers were stationed at the docks to ensure adherence to health guidelines.

On Dhaka-Tangail highway, vehicles got stuck in a 20-kilemetre gridlock from Nabinagar to Chandra area. A similar situation was seen from Baipail to Abdullahpur.

"It took over two hours to reach Savar's Nabinagar intersection from Gabtali bus terminal in the capital. Usually, it takes around half an hour," said Abu Sadique, a Dinajpur-bound passenger.

A mad rush of passengers was also seen at Sadarghat launch terminal in the capital as well.

Law enforcers were present at the terminal to ensure Covid-19 safety rules, but crowds of passengers on the vessels seemed reluctant to abide by the health guidelines.

BIWTA Joint Director Joynal Abedin said: “Passengers are being warned repeatedly of health safety rules. We are urging them to wear facemasks. Besides, lawmen and BIWTA officials are present at the terminal to raise awareness.”