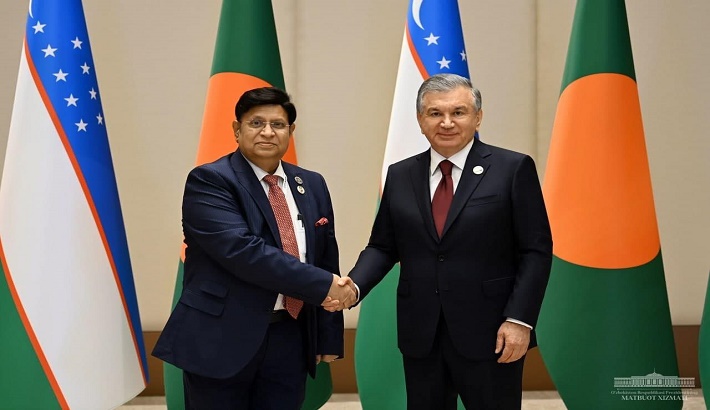 Foreign Minister AK Abdul Momen had a meeting with Uzbekistan President Shawkat Mirziyoyev in the frame of International Conference on “Central and South Asia: Regional connectivity. Challenges and opportunities” in Tashkent, Uzbekistan.

During his meeting held in Friday (July 16), Momen conveyed greetings and best wishes to the President of Uzbekistan on behalf of President Md Abdul Hamid and Prime Minister Sheikh Hasina.

An exchange of views took place on topical issues of the international and regional agenda, prospects for expanding multifaceted cooperation between Uzbekistan and Bangladesh, issues of further expansion of practical interaction and promotion of new cooperation projects of the two countries, further deepening economic cooperation between Central Asia and South Asia, which has historically and closely linked to our region in economic, social, cultural and civilizational dimensions.

The Foreign Minister shared with the President of Uzbekistan youth activities of Bangladesh.

Momen informed that Youth Activities are improving much in Bangladesh and they are directed to Increase Youth resilience to violent extremism and Antidemocratic activiies.

Momen handed over invitation letter to the Uzbekistan President from President Md Abdul Hamid to pay an official visit to dhaka preferably in December this year.

Uzbekistan President happily accepted the invitation and expressed thanks and gratitude to Bangladesh President and told that he would check his agenda for December 2021 and try to visit as soon possible.

Foreign Minister noted the importance of opening Uzbekistan Embassy in Dhaka, resumption of Direct Passenger Flights between Dhaka and Tashkent to bring bilateral and interregional relations to a new height.

Mirziyoyev assured that Uzbekistan Government would examine the resumption of direct flights. Foreign Minister of Uzbekistan who was present during the meeting requested his colleague to start necessary steps for opening Uzbekistan Embassy in Dhaka.

At the end of the meeting,  Momen appreciated the initiative of the President of Uzbekistan Shavkat Mirziyoyev to strengthen regional connectivity. The President thanked him for participating in the international conference and told that his appreciation and inspiration would help go forward.