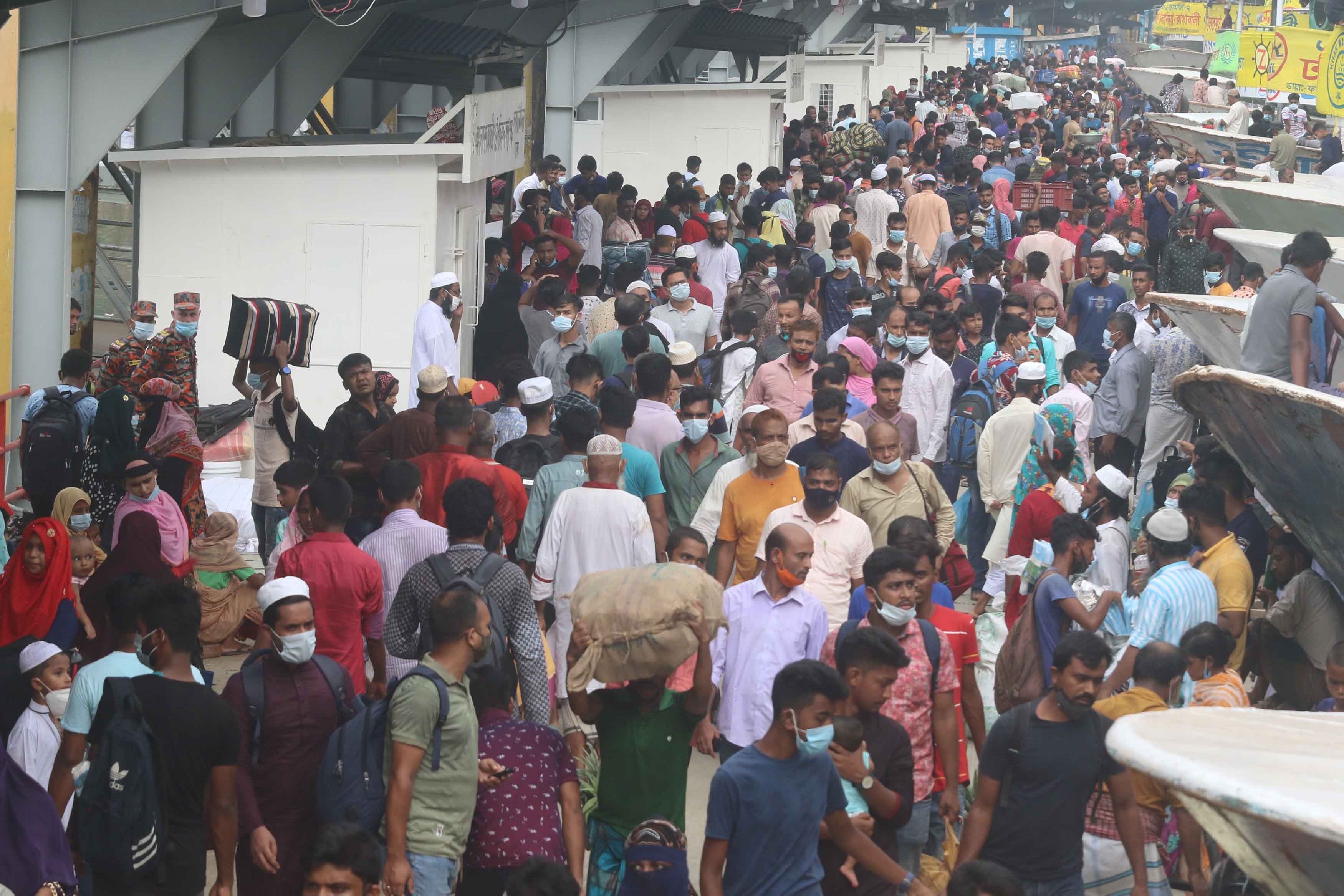 Many homebound people, who are leaving the capital ahead of Eid-ul-Azha, throng Sadarghat Launch Terminal in the city on Friday without wearing facemasks amid risk of coronavirus infection.

Long tailbacks were created on some highways in the country on Friday as people have started to leave the capital for their native homes to celebrate Eid-ul-Azha after the resumption of public transport.

Public transport, which was suspended due to the strict lockdown imposed countrywide to curb the surge of coronavirus, resumed services on Thursday, allowing Eid holidaymakers to travel to their destinations.

After getting the chance of the relaxed lockdown, home-goers rushed to launch terminal, bus and train stations to get vehicles.

Due to the homeward rush, severe traffic congestions were created in and around Gabtali, Mohakhali and Sayedabad inter-district bus terminals, Kamalapur railway station and Sadarghat launch terminal in the capital.

As the lockdown was relaxed, heavy traffic hit Dhaka-Tangail highway and other highways ahead of Eid-ul-Azha.

About a 14-kilometre tailback was created on busy Dhaka-Tangail highway from the east side of Bangabandhu Bridge to Elenga since early morning.

Besides this, a 16-kelometre gridlock was created on Nabinagar-Chandra highway while a 17-kilometre tailback on Dhaka-Aricha highway on Friday.

Traffic was moving at a snail’s pace, said Inspector Delwar Hossain of Tangail Traffic Police. The highway became busy as the long-haul buses started trips on Thursday after the lockdown was relaxed.

Buses departing from Gabtoli transport hub left half of the passenger seats empty as part of the health protocols.

Passengers were seen waiting for buses for hours at the terminal or on the streets.

Meanwhile, thousands of people have started gathering at Shimulia ferry terminal in Munshiganj since Friday morning to cross the river Padma. Simultaneously, a long queue of vehicles was also seen there.

As many as 80 launches and 13 ferries are operating on the Shimulia-Kewrakandi route, but the number of vessels appeared insufficient to handle the load.

The vessels are slowing down due to the high tide in the Padma, BIWTA sources said.

River transport services have been ordered to operate at half capacity but the vessels on the busy Shimulia-Banglabazar waterway, linking Dhaka to the southern districts, are carrying excess numbers of passengers.

Local authorities are yet to take any action against the breach of health restrictions amid the pandemic.

“Vehicles crammed into the port due to the pressure of home-bound people ahead of the Eid. Four of the 17 ferry services have also been suspended due to strong current in the Padma,” Bangladesh Inland Water Transport Authority (BIWTA) AGM Md Shafiqul Islam said.

Police along with local authorities set up a control room to monitor movement at the port, but people ignored health safety guidelines on the fight against Covid-19 outbreak. Many were seen without masks.

Hundreds of goods-laden trucks queued up on the expressway outside Shimulia port. Their wait is getting longer as the authorities are prioritising passenger vehicles.