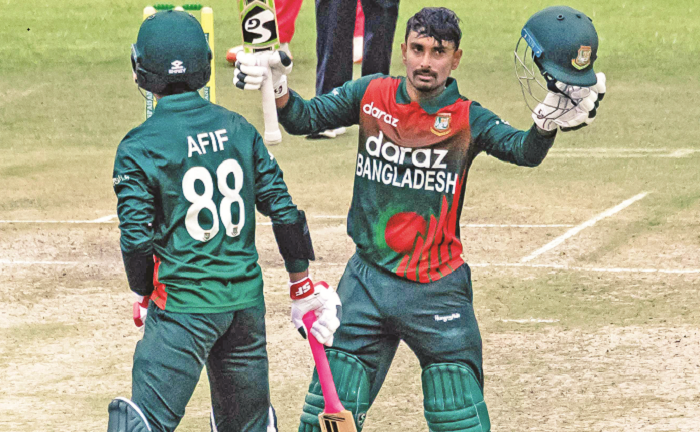 Wicketkeeper-batsman Liton Das struck a valiant hundred before Shakib Al Hasan completed his third five-wicket haul in ODIs as Bangladesh clinched a comprehensive 155-run victory over hosts Zimbabwe in the first of three-match ODI series in Harare on Friday.

Liton made 102 off 114 balls, his fourth ton in ODIs and third against Zimbabwe in the last four meetings to guide Bangladesh to score 276-9 in their stipulated 50 overs after they were initially reduced to 74-4.

Shakib then claimed 5-30 to rattle Zimbabwe batting line-up as the visitors bowled them all out for only 121 runs in 28.5 overs to go 1-0 up in the ODI series.

Bangladesh will now fancy their chances to win their first ODI series in Zimbabwe since 2009 when they take on the hosts in the second ODI on Sunday at the same venue.

The Tigers, however, had a poor start in the game after being asked to bat first as they lost skipper Tamim Iqbal (0) and experienced Shakib (19) to pacer Blessing Muzarabani (2-47) early in their innings.

Mohammad Mithun (19) and Mosaddek Hossain (five) followed them soon as they gave away their wickets by playing loose shots off Tendai Chatara and Richard Ngarava respectively.

Liton, who could make only 101 runs in his last eight ODIs, however, had a different plan on the day as he shared a crucial 93-run stand for the fifth wicket with Mahmudullah and recovered Bangladesh from the early damages done by Zimbabwe bowlers.

Mahmudullah departed after making 33 runs but Liton completed his well-deserving hundred with eight fours and he was only dismissed to square leg off Ngarava (2-61) after taking Bangladesh over the 200-run mark.

Afif Hossain and Mehidy Hasan then played two vital knocks of 45 and 26 runs respectively and added a 58-run stand off just 42 balls to give Bangladesh a challenging total on board.

Luke Jongwe, who removed both the batters in successive deliveries in the penultimate over, finished with 3-51.

Zimbabwe batters couldn’t bring Bangladeshi bowlers in any testing situation during their chase as they lost wickets at regular intervals and apart from Regis Chakabva’s 54-run innings, no other batsman could actually make any decent effort with the bat.

Zimbabwe batsman Timycen Maruma, who got injured during their fielding, didn’t bat in the innings.

Shakib, who began the match as joint-most wicket-taker for Bangladesh in ODIs along with Mashrafe Mortaza (269 wickets), removed Brendan Taylor on 24 in the 15th over to become the country’s most successful bowler in ODIs.

The 34-year old later picked four more wickets to take his tally to 274 wickets in 213 matches and helped Bangladesh earn their second biggest win against the hosts in ODIs.