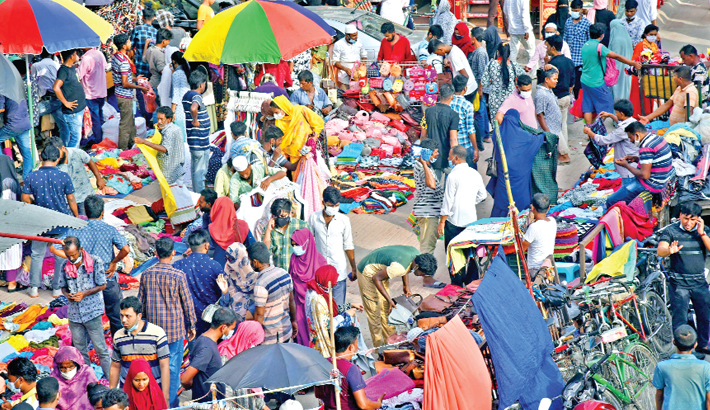 Health safety guidelines for a fight against coronavirus are being largely violated across the country as a strict lockdown has been relaxed until July 22 on the occasion of holy Eid-ul-Azha festival.

Police said many people without masks thronged streets, footpaths, kitchen markets and shopping malls on Thursday, the first day of the relaxed lockdown.

With huge movements of public transport and other vehicles on the streets, the traffic management virtually collapsed in the capital.

Sadarghat, the main launch terminal in the capital, was overcrowded with commuters as public transport resumed services.

Besides this, large crowds of people and vehicles were seen at the bus stand at ferry terminals at Shimulia of Munshiganj and Paturia of Manikganj.

Public transport services resumed across the country on Thursday with the government lifting the coronavirus curbs for a week.

When contacted, Abu Raihan Mohammad Saleh, joint commissioner (traffic north) of Dhaka Metropolitan Police, said: “Due to the strict lockdown, many people couldn't step out of their homes.

As soon as the lockdown restrictions were lifted, people and motor vehicles in large numbers took to the city streets, creating huge traffic congestions, he added.

“But, our forces are working hard to tackle the nagging traffic jams,” he also said.

"However, police and other law enforcement agencies are keeping a strict vigil on the roads to ensure strict adherence to all Covid safety protocols," he added.

A number of long-distance buses were seen leaving its depots for their destinations.

Buses were seen carrying passengers at half their capacities. In the morning rush, several areas of the city witnessed traffic snarls, giving commuters a harrowing time on the roads.

A number of inter-district buses entering and exiting the city also contributed to the creation of traffic jams.

Traffic police said a huge pressure of vehicles has been seen since morning as all vehicles have started plying the roads.

On June 22, the government authorities suspended movement of all passenger vehicles in Narayanganj, Gazipur, Munshiganj, Manikganj, Madaripur, Rajbari and Gopalganj to curb the spread of Covid-19.

Bangladesh Inland Water Transport Authority (BIWTA) on June 21 announced its decision to suspend the movement of launches, speedboats and trawlers following the Cabinet Division’s circular on the imposition of lockdown in these seven districts.