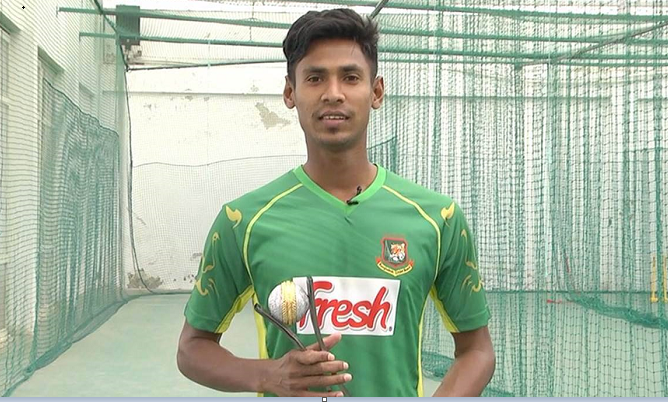 Left-arm pacer Mustafizur Rahman is uncertain in the first ODI of the three-match series between Bangladesh and Zimbabwe which is set to begin on Friday at the Harare Sports Club.

Mustafizur has sustained a blog on his ankle during the lone practice match on Wednesday. He had to leave the field due to this injury.

Bangladesh ODI captain Tamim Iqbal on Thursday said the chance of Mustafiz to take part in the series opener is fifty-fifty.

“Our physio is looking after him,” Tamim told in the pre-series virtual press conference. “He just suffered a blow. As of today, he is not fully fit. His chance to play the first match is fifty-fifty. We might get a better idea by the time going.”

The captain himself is also suffering from a knee injury which might take a longer period of time to heal. For now, Tamim decided to continue playing managing his injury as per the advice of the doctors.

“It’ll take much time to heal. It’s not something to get healed in five or six days,” Tamim told about his condition. “The physio has set a plan for me. For now, we’ll try to manage it without taking any risks. I batted yesterday (in practice match) taping my leg. There was no problem. Let’s see what happens next.”

Bangladesh are set to miss the service of Mushfiqur Rahim as well. The wicketkeeper-batsman returned home yesterday. His parents tested positive for Covid-19. After hearing the news, he opted to skip the ODIs and T20Is of the ongoing series.

Rubel Hossain, the right0-arm pacer, is also doubtful for the first match. He just left Dhaka on Thursday. Due to the vis complications, he and Shamim Hossian couldn’t take the flight for Zimbabwe early.

Without Mustafizur and Rubel, Bangladesh’s pace-bowling line-up will be led by Taskin Ahmed who has been tremendous in recent times. He will be accompanied by Shoriful Islam. Along with them, Mohammad Saifuddin is also capable of bowling pace.

Before the ODIs, Bangladesh played a one-off Test against the hosts and won by 220 runs riding on the career-best batting performance by Mahmudullah Riyad. Mehidy Hasan also did well taking a nine-wicket haul in the match— Bangladesh’s best in away Tests.