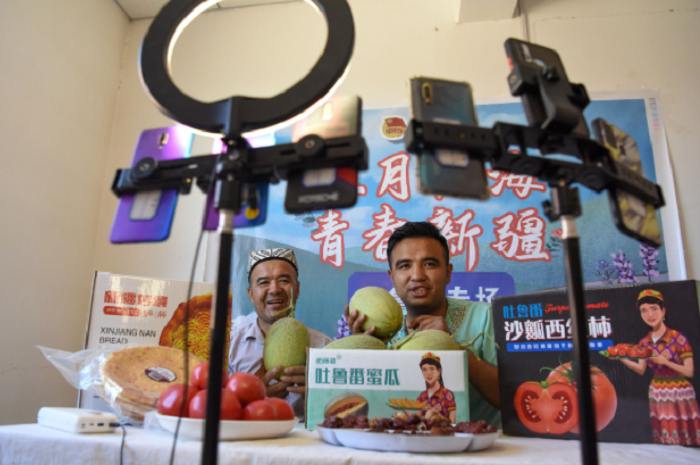 Protection of labor rights in the Xinjiang Uygur autonomous region has been constantly improved as reports and complaints from people from all ethnic groups concerning salary arrears, failure to provide labor contracts and other infringements have been investigated and corrected, a white paper said.

While Xinjiang has made employment the priority among its measures for improving people's well-being, it has put in place a supervisory system to protect labor rights and interests, according to the white paper, "Respecting and Protecting the Rights of All Ethnic Groups in Xinjiang", which was published on Wednesday by the State Council Information Office.

The system guarantees legitimate labor rights and interests in accordance with the law, such as equal employment opportunities, salaries, social insurance, rest and leave, and occupational safety, it added.

While some foreign media and politicians have accused the region of allowing the existence in recent years of "forced labor" in certain key industries such as the cotton and photovoltaic sectors, the white paper stated that Xinjiang workers' employment preferences are fully respected, and opportunities have been created for people to find jobs locally, seek work in urban areas, or start their own businesses.

"Currently, rumors, distortions and complete fabrications are being spread by some foreign media and politicians. This is a calculated campaign to undermine the Chinese government's enormous efforts to protect ethnic equality, and it misrepresents the historic progress that has been made on human rights in the region," it said.

"Their goals are to discredit China, interfere in China's internal affairs, restrict China's development, and destroy stability and prosperity in Xinjiang."

Many Xinjiang-based enterprises have been sanctioned or targeted by the United States and the European Union due to groundless accusations of "forced labor". On June 24, the White House announced that the administration of President Joe Bid-en had put five Xinjiang-based business entities that make polysilicon－a raw material for photovoltaic products－on the Department of Commerce's "entity list", which requires US companies to get an export license before dealing with them.

"Certain US authorities attempt to curb the development of Xinjiang's rising photovoltaic industry in the name of so-called forced labor. By interfering with normal international business cooperation and competition, the US clearly seeks to gain from it," the People's Congress of the Xinjiang Uygur Autonomous Region－the regional legislature－said in a statement released on Tuesday evening.

The Xinjiang regional government also issued a statement on Tuesday saying that the region has become a key player in polysilicon production in China and globally, and that is why it has become an issue for the US.

China is expected to produce 567,000 metric tons of polysilicon this year, about 85 percent of global output. About 57 percent of China's polysilicon will be produced in Xinjiang this year, according to the Xinjiang Nonferrous Metal Industry Association.

"The US wishes to see those companies reduce or cease their production. Eventually, it wants to see them move out of Xinjiang, which has fully exposed its intention to curb Xinjiang's development," the regional government said.

"The fact is that polysilicon produced in Xinjiang is made not only for the US market but the global market, so we aren't afraid of this unfair treatment."