Bustle back in Dhaka as public transport services resume 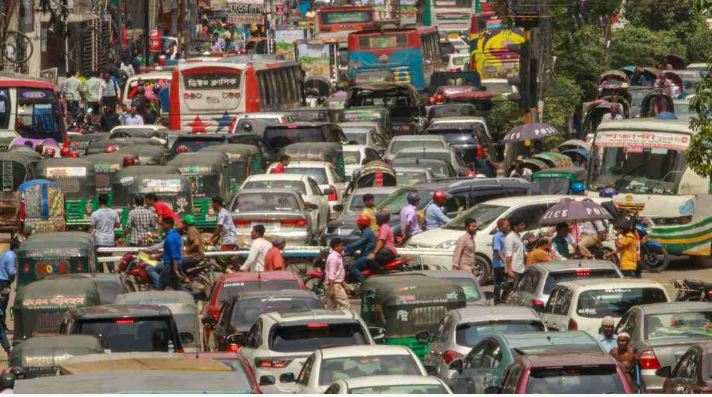 Public transport services resumed in Bangladesh on Thursday, with the government easing the lockdown curbs for a week ahead of the Muslim festival of Eid-ul-Azha.

A reality check by UNB in Dhaka revealed that several buses left their depots in the morning and were plying on several busy stretches of the national capital -- Mirpur Road, Uttara, Banani, New Market and Mohakhali areas to name a few.

Buses -- both intra-city and inter-district -- were, however, seen carrying passengers with 50 percent of their seating capacity. But such was the morning rush that several areas of the city witnessed traffic snarls, giving commuters a harrowing time on the roads.

Abu Raihan Mohammad Saleh, joint commissioner (traffic north) of Dhaka Metropolitan Police, said, “Due to the strict lockdown, many people couldn't step out of their houses. As soon as the lockdown restrictions were eased, people took full advantage of the same."

"However, police and other law enforcement agencies are keeping a strict vigil on the roads to ensure strict adherence to all Covid-safety protocols," he added.

A number of inter-district buses entering and exiting the city also contributed to the traffic jams.

Traffic Inspector Akter Hossain said, “A huge pressure of vehicles has been seen since morning as all vehicles have started plying on the roads.”

Besides, train and launch services also resumed operations across the country, keeping 50 percent of the seats empty, apparently to facilitate the movement of people ahead of Eid-ul-Azha.

On July 12, Railways Minister Md Nurul Islam Sujon said that the train tickets will be available online only to avoid any rush at the counters.

On June 22, authorities suspended the movement of all passenger vessels in Narayanganj, Gazipur, Munshiganj, Manikganj, Madaripur, Rajbari and Gopalganj to curb the spread of Covid in these districts.

Bangladesh Inland Water Transport Authority (BIWTA) announced its decision to suspend the movement of launches, speed boats and trawlers on June 21, following the Cabinet Division’s circular on the imposition of lockdown in these seven districts.

However, the restrictions won't apply on the movement of cargo vessels and emergency services. And legal action will be taken against violators, according to the BIWTA notification.

On July 13, the Bangladesh government decided to ease all lockdown restrictions in the country for eight days ahead of Eid-ul-Azha.

In a notification on Tuesday morning, the Cabinet Division said that the lockdown restrictions would be lifted from July 14 midnight to the morning of July 23.

However, strict restrictions will resume from July 23 and will continue till August 5, as per the order.

A record rise in the number of Covid cases and fatalities in recent days prompted the government to enforce a nationwide stringent lockdown.

All modes of public transport, including road, river, rail and air, remained suspended during the lockdown.