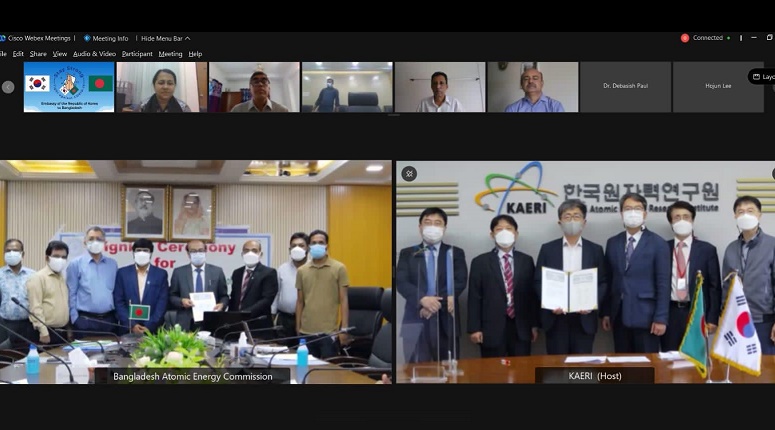 Korea Atomic Energy Research Institute (KAERI) has been awarded the tender for the modernisation of the 3 MW BAEC TRIGA Research Reactor (BTRR) and signed the contract with Bangladesh Atomic Energy Commission (BAEC) Thursday.

Due to the ongoing COVID-19 restrictions, the contract-signing ceremony was held virtually between KAERI and BAEC, with the presence of Dr Md Sanowar Hossain, Chairman of BAEC, Dr PARK Won-seok, President of KAERI, and Korean Ambassador to Bangladesh Ambassador Lee Jang-keun.

The project includes the design, supply, installation, testing, and commissioning of digital I&C system of BTRR, which has been in operation since 1986 and the duration of the project is expected to be 18 months.

It is also anticipated to be the stepping stone for further collaboration between KAERI and BAEC, including the prospective high-power multipurpose research reactor in Bangladesh.

In his congratulatory remark, Ambassador Lee highlighted that the commencement of the project marks the beginning of the Korea-Bangladesh partnership in the peaceful use of nuclear energy and is opening a new chapter in the bilateral ties as the two countries move towards diversifying the areas of cooperation beyond the RMG sector.

Ambassador Lee also noted that Korea, ranking 6th in the world in terms of the total capacity of nuclear power generation, is a world-leader in the peaceful use of nuclear energy from research to electricity production.

Fully committed to the international non-proliferation regime, Korea and Bangladesh will find further opportunities for cooperation in the future, he said.

Ambassador Lee looked forward to an early signing of the proposed MOU between KAERI and BAEC and a meaningful progress in the discussions between the governments for the conclusion of the bilateral agreement on peaceful nuclear cooperation.