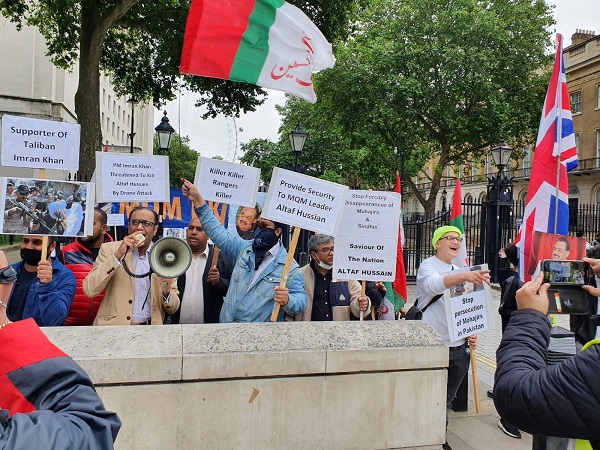 Protestors had gathered in front of 10 Downing Street. They included MQM dignitaries, office bearers, sympathisers and Mohajirs in large numbers who live in London.

The purpose of the protest was to draw attention of the British authorities, government especially the sitting Prime Minister Boris Johnson towards premonitions that have been cemented that Hussain’s life is in serious jeopardy.

This comes as Pakistani Prime Minister Imran Khan in country’s parliament vowed to “assassinate” Altaf Hussain in a drone attack provided the British government would allow them to carry such an operation in London.

MQM Central Coordination Committee Convener Tariq Jawaid while addressing to the protestors said that the government of Pakistan, military establishment and intelligence agencies have been hatching “conspiracies to assassinate” Altaf Hussain.

The Government of the United Kingdom and all democratic countries and institutions should take serious notice of these heinous conspiracies and provide full protection to Altaf Hussain, he demanded.

Khan has recently vowed to assassinate Hussain in a drone attack inside Britain’s national security walls, he said adding that the British government should sever all diplomatic relations with Pakistan over this threat.

Qasim Ali Raza in his address demanded that the Prime Minister of the United Kingdom, the Secretary of the Interior, the Foreign Secretary and all other agencies should take forthwith note of the threat of drone strikes.

Mustafa Azizabadi said that announcement of attack on the MQM Supremo Hussain spread all over the world and sparked anger among millions of his fans.

Hashim Azam said that MQM won’t take this lightly but would expose the military-occupied state of Pakistan with terror promoting demonic agenda that will render the peaceful would unsafe. “We will expose Pakistani rulers for their notorious plans against the humanity.”

The protesters had held MQM flags, portraits of Hussain, the founder and leader of the Movement. The placards carried demands for Hussain’s security, condemnation of Imran Khan, military junta against threats of drone strikes targeting Hussain.