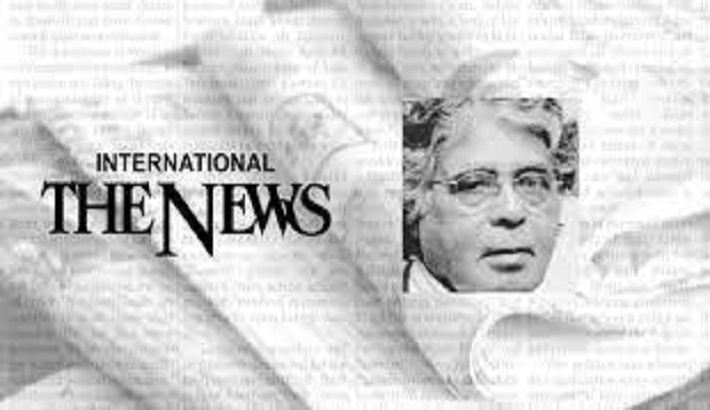 And now we have this latest assault on our senses, the video of a young couple being violated by a gang. Reports have been published this week that the Islamabad police have arrested the leader of this gang and some of his accomplices. We have been assured that a “ruthless campaign” is in progress against these criminals.

One measure of how this case has shocked the nation is that the prime minister has taken “notice” and directed swift action against the culprits. At the same time, the arrested leader of what is ostensibly an organised blackmailing network is said to be unrepentant. There he is in the video, visibly proud of his exploits. He has the looks and demeanour of individuals who exercise power and authority in the lower echelons of society.

We are told that this gang was “working with impunity for the last eight months from different areas in the federal capital”. And, “after tormenting its victims physically and mentally, [it] would upload their compromising video clips, ruining their lives”.

There are details that I would not want to go into. What I feel more concerned about is that this is only one more glimpse of our moral degradation. Besides, there are so many different aspects and manifestations of the state of our society in the context of its dominant thinking, deviations and passions.

Lately, some vile acts committed by specific individuals have been revealed through video clips. Without these clips, most of which are sensational and shocking, we would not have learnt about the crimes that were committed. Crimes involving sex have naturally attracted more attention, though very little deliberation.

Yes, we are constantly harangued about the moral decadence of the West and how its permissive ways and personal freedoms have polluted our educated youth, particularly women who want to be liberated and empowered. Unfortunately, we are unable to explore these issues in a rational manner because of the overall environment of intolerance, social oppression and regressive ideas often sponsored by the state.

As it is, the process of progressive social change in a traditional, potentially authoritarian and, in most areas, under-developed country is bound to be problematic. In Pakistan’s case, the rulers have not been attending to social issues and have generally collaborated with starkly illiberal and fanatical elements. The consequence is what we have in the guise of our declining moral values.

A problem that I have not been able to decipher is to define the collective personality of Pakistan, in terms of its character, values, emotional strength, self-respect, intellectual capacity, goals, et cetera, et cetera. Indeed, different groups would look at it differently. Given that we all love our country and wish the best for it, we need to be objective and realistic in our assessment.

I am reminded of an observation about Pakistan made by Christopher Hitchens. He had said that if Pakistan was a person, “he would be humourless, paranoid, insecure, eager to take offence and suffering from self-righteousness, self-pity and self-hatred”. One may not agree, though the description would fit most members of the ruling elite.

We have the benefit of a large number of international surveys and reviews that are supposedly based on verifiable statistics and studies. In this domain, our position is unreservedly depressing. But when you listen to rulers and their spokespersons, you get the feeling that they are not at all aware of these findings. When the charge on Pakistan appears to be outrageous, we have loud denials and lame clarifications.

For example, Imran Khan has figured among press freedom ‘predators’ in the report of Reporters Without Borders, released this week. That Modi is placed in the same gallery is of little consolation. Pakistan is placed at 145 among 180 countries. Expectedly, Pakistan has rejected Imran Khan’s inclusion among ‘predators’.

In passing, let me mention an index of the power of passports, also released this week. It has relegated the Pakistani passport to fourth position from the bottom, lower than Somalia. The three countries lower than ours are Syria, Iraq and Afghanistan.

However, these rankings have not discouraged our rulers from frequently claiming that Pakistan is set to become a great country in the world. If this is a sincere resolve, how should the rulers deal with the derelictions of the kind that has become this week’s reason for national shame? How will it not fade out of headlines in a few days, like other similar atrocities in the past?

To begin, look at the entire picture. Try to understand why primitive passions have inundated our collective behaviour. At one level, we have to deal with a lack of civilisation. At another, there is this simple lack of civility in our social life. Again and again and again, we get video evidence of how the poor and the under-privileged are beaten and humiliated. Pakistan, at its heart, is a deeply wounded nation. It is really an issue of our collective mental health.

To be sure, the healing can only begin when the rulers are able to look out of the window of their citadel of power and see how the ordinary people of this country live their lives. Sex offences belong in a particular category. Social injustice is also a kind of rape. But nothing happens when, say, a mother throws her children into the river because she cannot feed them.

Recently, a national security briefing was held for parliamentarians. But is it not also a matter of national security that the fabric of our society is in tatters? Our security apparatus, unchallenged in how it deals with dissidents, seems incapable of monitoring our moral and intellectual depravity which may be likened to an infiltration of anti-state forces.

We know who speaks and who listens when a briefing on national security is held. But a more useful briefing would be where the rulers would listen to social scientists including psychiatrists to learn about the health of the system they preside over. In fact, they themselves need therapy.

The writer is a senior journalist