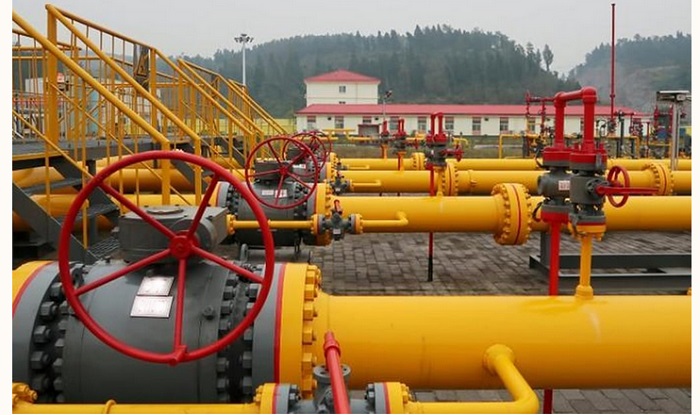 ISLAMABAD: Russia is said to have expressed its concerns over reports that Pakistan is considering working out alternate plan to construct the $ 2.5 billion Pakistan- Stream Gas Pipeline (PSGP) project from Port Qasim to Kasur, formerly known as North South Gas Pipeline, sources close to the SAPM on Power and Petroleum told Business Recorder.

Ministry of Foreign Affairs has conveyed Moscow's concerns to Petroleum Division, prior to the visit of a 12-member delegation headed by AA Tolparov, Deputy Director of Department of Foreign Economic Cooperation and Fuel Market Development. The delegation will hold four- day parleys with Pakistan starting from Monday (today).

Petroleum Division, which earlier agreed to a 56 diameters pipeline with Russia, is now considering using 42 diameter, which is more expensive. A Lahore -based company, which has close "liaison" with a key person in Petroleum Division, is keen to develop pipeline despite the fact it has not done any project of this level.

US Charge d' Affaires, Ms Angela Aggeler, also met the SAPM on Power and Petroleum a couple of days ago and sought update on the gas pipeline project. Some stakeholders fear that the meetings of Americans before talks with Russians could be aimed at creating confusion, which will not be liked at the highest level.

SAPM on Power and Petroleum Tabish Gauhar maintains that Russian companies are seeking return at par with IPPs, which is not feasible for Pakistan, and tweeted " the US Charge d' Affaires discussed various opportunities in Pakistan's power and petroleum sectors for American companies under existing and upcoming government policies and regulatory framework."

According to the Ministry of Foreign Affairs, following the recent signing of amended Protocol to the Inter- Government Agreement (IGA) between Pakistan and Russia on North -South Gas Pipeline some media reports citing an alternate plan of Petroleum Division for the construction of the project have surfaced. Reportedly, the plan envisages construction by Parco, Sui Southern and Sui Northern to preempt any failure of talks with the Russian government.

Ministry of Foreign Affairs argues that such reports seem at variance with the understanding reached with Russia at senior levels. The Russian government has expressed its political will to construct the pipeline since the IGA was signed in 2015.

Also representatives of consortium of companies nominated by the Russian government for the construction of the pipeline recently met Pakistan's Ambassador in Moscow to discuss next steps in implementing the signed Protocol.

According to the Ambassador, such reports are likely to cause concerns in the Russian government/ officials, who approached the Pakistani embassy in Moscow requesting clarification of Pakistan government's position on the issue. Government of Pakistan and Government of the Russian Federation had signed an Inter-Governmental Agreement (IGA) on cooperation of a milestone project to develop gas transmission infrastructure of 42" to 56" pipeline diameter, costing US $ 2.25 -2.5 billion, that will ensure enhanced energy security of Pakistan. From Port Qasim to district Kasur, spread over 1,040 km length of trunk pipeline, the project will secure sustainable gas supply infrastructure for next 40 years. This will be the most essential conduit between installation of new LNG terminals and industrial growth of Pakistan . Besides, this is an historic strategic opportunity to strengthen investment relationship with Russia .

Pakistan Stream Gas Pipeline Project (formerly known as North South Gas Pipeline) was announced in a joint statement of Pakistan-Russia Inter Governmental Commission on November 26-28, 2014. The Economic Coordination Committee (ECC) of cabinet gave its approval, in principle, to it on January 10, 2015. Later, the Cabinet Committee on Energy (CCoE) authorized Petroleum Ministry to engage with Russian counterparts on October 14, 2015. The then Prime Minister accorded approval to the draft of the IGA through summary on July 8, 2015 and IGA was signed in Islamabad by Petroleum Ministers of the two countries on October 16, 2015. On April 11, 2016, ECC gave its decision on project model and constitution of PNE. However, ECC has also approved financing model of 1.2 Bcfd capacity RLNG-III pipeline by Suis on January 5, 2018.

According to the Petroleum Division, between 2015 and 2020, timelines to finalize the contractual agreement were extended six times. Meanwhile, the ECC decided to fund the project through GIDC on February 10, 2020. This was followed by the Supreme Court decision on the GIDC on August 13, 2020. On October 15, 2020, CCoE reiterated its decision to utilize GIDC in compliance with Supreme Court deadline which was ratified by the Cabinet with the direction to utilize GIDC subject to approval of GIDC on December 24, 2020. Consequently, GIDC Board gave its approval on December 28, 2020 and Rs.62.5 million was released to ISGS on May 25, 2021 after completing the formalities of Finance Division.

Federal Cabinet approved the Protocol to IGA on March 9, 2021. An amended IGA has been signed on May 28, 2021 whereas the original IGA was signed on October 16, 2015. At present, the structure of Russian consortium has been finalized being seventh version in the last five years in which the Russia-nominated entity has been identified as FSUE (Russian Ministry of Energy), ETK (Execution specialist) and PAO IMK (Production specialist) - with a company namely, PAKSTREAM LLC.

The sources said broad understanding has been achieved in the signed IGA equity share, role in decision making on selection of EPC contractor, pricing, FEED, risk sharing arrangements, facilitations and concessions/exemptions etc. According to the IGA, Pakistan nominated entity, Inter State Gas System, will undertake the project through GIDC proceeds of (74%) and external equity (26%).

Now the amended IGA paves the way for signing of shareholders' agreement, draft of which has been shared with Russia on December 23, 2020. In return, the Russian side shared the "Heads of Terms" on March 17, 2021. Both parties are working on critical aspects of "SHA" including shareholding structure of SPC, Corporate Governance model, project implementation arrangements, securities /guarantees, tariff, facilitation, and risk mitigation.

Petroleum Division maintains that at this stage, key challenges include finalization of "SHA" by July 27, 2021 for which the Petroleum Division is on look out for a professional legal team. A technical team comprising officials has been notified and negotiation strategy is being finalized through deliberations on "Heads of Terms" and "SHA", to safeguard commercial and economic interests of Pakistan.

Formal project feasibility is not yet ready which can be fast tracked through NESPAK for which a case for exemption from PPRA rules is in process. Work on alignment of completion of project with COD of new LNG terminals is also underway.

The sources maintained that looking at the overall picture, three scenarios are drawn which are as follows ;(i) in scenario No. 1, there may be the Russian EPC Contractor (along with external funding partner), and Pakistani firms may get business for supply of raw materials, labor, O & M, etc. Russia may enhance its equity contribution along with O & M contract post COD. Pipe manufacturing and compressor stations may go under the Russian control (to be manufactured outside);(ii) in scenario No. 2, a consortium of local and international companies takes a significant stake in the EPC contract along with enhanced financing exposure.

In case of local manufacturing of pipeline, the project will deliver enhanced local technical/HR contribution, like SNGPL and SSGCL and along with an international partner may take long- term O& M contract and ;(iii) in case of a situation where Russians are no more interested in the project, Pakistan has to be ready with a contingency plan. Pakistan may form a consortium of local and international companies to win EPC contract along with enhanced financing exposure. Local manufacturing of pipeline may be introduced to ensure maximum local technical/HR contribution and SNGPL and SSGCL along with an international partner may take long-term O & M contract.

In order to move forward, Petroleum Division sought policy direction from CCoE on "SHA" negotiation, project structure and financing arrangements as well as allowing Petroleum Division to give a strong signal to local firms to form JV ahead of selection of EPC contractor. Petroleum Division also argues that it may be allowed to sign local steel manufacturing industry to prepare for the forthcoming challenge.

All this will be based on a firm commitment from the Finance Ministry for advance releases of GIDC installment, commensurate with project expenditures while Petroleum Division continues to evolve its understanding on contingency plan in case of deadlock with the Russians.

On June 24, 2021, the CCoE Chairman, Asad Umar, observed that the issue was very important for the future economic growth and energy requirement of the country. Moreover, various directions have already been conveyed by the CCoE from time to time. Therefore, the project needs to have financial close without further loss of time.

The Committee also observed that there are massive negative consequences of delays in the implementation of this project and the deadline set by Supreme Court of Pakistan has already been missed, with no imminent possibility of start of work. Therefore, an alternate plan needs to be finalized as soon as possible, but not later than mid-July 2021.