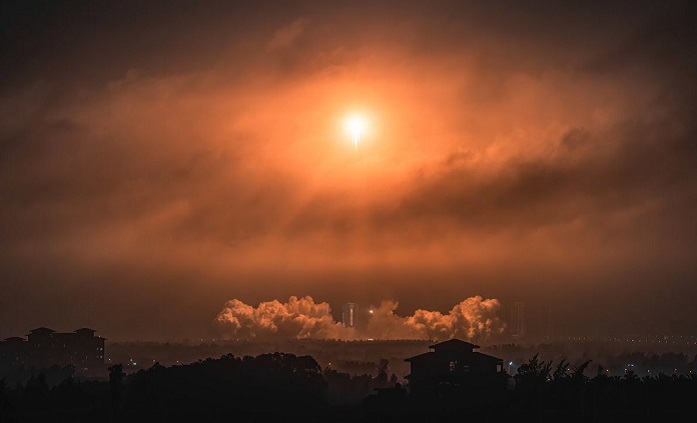 China is making sizable, long-term investments in weapons designed to jam or destroy satellites as the nation seeks to rapidly narrow the gap in space technology with the U.S., according to the top intelligence official for the Pentagon’s Indo-Pacific command.

China is pushing to develop antisatellite weapons with capabilities from “dazzling to jamming, to kinetic kill-from-the-ground, from space -- all that, they’re on the march,” Rear Admiral Michael Studeman said this week during an intelligence-security trade group’s webinar.

Studeman’s comments mark the most current unclassified assessment of the counter-space capabilities of a nation that Defense Secretary Lloyd Austin repeatedly refers to as the top challenge for U.S. defense planning and spending.

China’s threats to U.S. satellites as well as Russian advances in counterspace technologies were among the primary justifications American officials cited for establishing the U.S. Space Force, the sixth U.S. military service branch and the regional Space Command, during the Trump administration.

“They take a look at our space capability and want to equal and exceed those and be able to dominate to guarantee themselves the maneuvering they need to be able to secure their objectives if they’re in a fight,” Studeman said.

The U.S. Office of the Director of National Intelligence said in April that the Chinese military “will continue to integrate space services -- such as satellite reconnaissance and positioning, navigation, and timing and satellite communications -- into its weapons and command-and-control systems to erode the U.S. military’s information advantage.”

The House Appropriations Committee, in a draft report on the fiscal 2022 defense bill obtained by Bloomberg Government, signaled its concern over “the growing threats posed by ground-based lasers capable of damaging or destroying sensitive space sensors in low-orbit, and the lack of a coordinated strategy to understand this threat and develop concepts to mitigate its risks.”

Without mentioning China, the report directed the Pentagon, in coordination with the ODNI, “to provide a plan to collect, consolidate, and characterize laser threat activity data of potential adversaries, and to develop strategies to mitigate these threats.”

A top U.S. counterspace weapon designed to temporarily jam but not destroy Chinese and Russian satellites is known as the Meadowlands system. The U.S. Space Force is building an arsenal of as many as 48 of these ground-based weapons over the next seven years and declared the first one operational in March 2020.