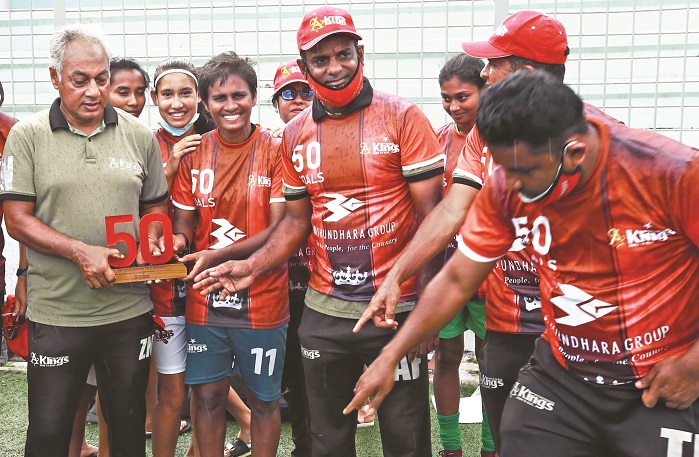 Kings earlier beat ARB CSC by 1-0 goal in the first-leg match. With the day’s victory, the holders earned a total of 33 points from 11 consecutive wins while ARB CSC remained second of 27 points from 9 wins and 2 defeats.

To secure the title, the leaders have to earn at least 4 points from their three remaining matches against fourth-placed Cumilla United on July 15, fifth-placed Jamalpur Kacharipara Akadas on July 17 and sixth-placed Nasrin Sports Academy on July 19.

Kings’ captain Sabina Khatun reached a 50-goal milestone for Kings in two seasons as she netted twice in the 22nd and 30th minutes.

Tohura Khatun added the third goal in the 90th minute for the team.

A total of three matches were held on the first day after the lockdown break. The league was temporarily suspended due to the ongoing countrywide lockdown last June. The lockdown will be eased on Thursday but the Bangladesh Football Federation suddenly started the league with special permission from the sports ministry.

Besides, Brahmanbaria beat Cumilla United by a 1-0 goal. Shipra Rani netted a suicidal goal in the 45th minute.

Shita completed her hat-trick scoring three goals in the 29th, 50th and 72nd minutes. Shopna Akter and Airin scored one each in the 79th and 89th minutes.

Tonnima Bishash, Nasrin Akhter and Joynob Bibi Rita scored one each for Saddapuskuruni in the 8th, 27th and 58th minutes.

Nasrin earned 16 points from 5 wins, one draw and 5 defeats while Saddapuskuruni remained with their previous credit of 3 points from one win and 10 defeats.