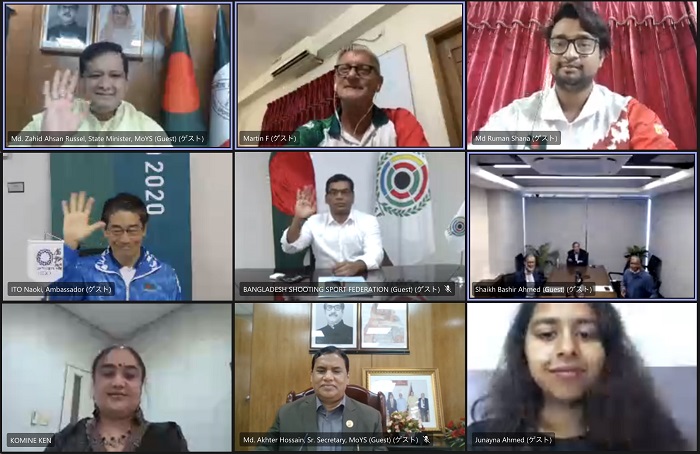 The Embassy of Japan and Bangladesh Olympic Association jointly organized the encouragement rally on Tuesday for the Bangladeshi Olympic team virtually.

In his welcoming remarks, Ambassador Ito Naoki said that Japan as the host nation are genuinely excited to welcome the Bangladeshi Olympic team to Tokyo 2020.

On behalf of the Japanese government and Japanese people residing in Bangladesh, he conveyed best wishes and a hearty send-off to the Bangladeshi Olympic team.

“We are committed to ensuring that the Games are held safe and secure. Therefore, please rest assured and visit Japan without any worry. Do concentrate on your performance. The safe and secure Games in Tokyo will show the world that we can unite people's hearts and minds globally and get over the difficulties with the efforts and wisdom of humankind,” said Ambassador Ito.

Ruman Shana and Ms. Junayna Ahmed have expressed their goals to achieve their best result this time.

Zahid Ahsan Russel in his speech extended his heartfelt thanks and gratitude for organizing this pre-departure reception for Bangladesh contingent on the evening of attending TOKYO 2020 Olympic Games virtually.

“This is a remarkable moment for Bangladesh and her best friend Japan as well. The relationship between Bangladesh and Japan is very much friendly and historical. Japanese government and her people have extended all-hearted sympathy to Bangladesh during the critical days of our great liberation war,” said the state Minister for Sports.