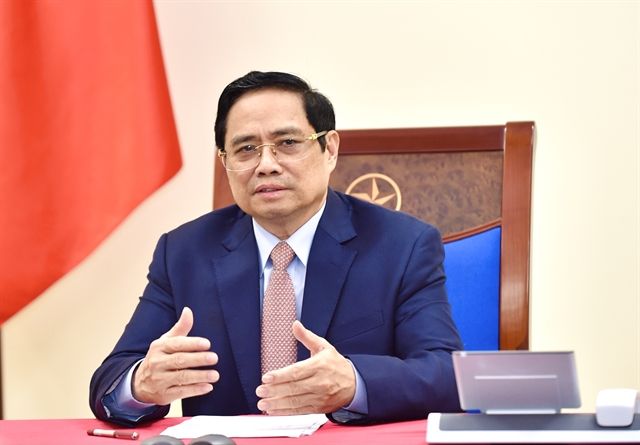 Prime Minister Phạm Minh Chinh spoke with his Indian counterpart Narendra Modi during a special call during which the two Government leaders discussed measures to further their comprehensive strategic partnership.

During the phone conversation, PM Modi congratulated Vietnam over its achievement in fighting Covid-19 and socio-economic development. He affirmed that India wants to promote ties with Vietnam in politics, economy, defence-security and cultural exchanges.

The two sides agreed to maintain contact at both high level and other levels in flexible forms such as online or in-person when conditions permit.

They also vowed to organise activities to commemorate the 50th anniversary of Vietnam-India bilateral diplomatic relationship in 2022 (January 7, 1972-2022).

The two leaders affirmed that the countries will work together and support each other to drive back the Covid-19 pandemic.

PM Chính asked India to help Vietnam access vaccine supplies as soon and as much as possible, and transfer vaccine production technology for Vietnam. The Indian PM said he is ready to cooperate closely with Vietnam in this regard.

The two PMs also agreed to continue making the best use of consultation and dialogue mechanisms, and expand bilateral cooperation in the defence industry and coordination in UN peacekeeping activities. They promised to intensify work in responding to both conventional and non-conventional security challenges.

The two leaders agreed to work for the goal of US$15 billion in annual bilateral trade through promoting trade, cutting technical barriers, and limiting trade protection measures against each other’s exports, especially Vietnam’s farm produce.

PM Chính called on Indian businesses to invest in Vietnam in such fields as processing and manufacturing, automobile supporting industry, information and communication technology, and renewable energy.

The two sides reached consensus on supporting each other and closer coordinating at regional and international forums, particularly in the UN when both countries are serving as non-permanent members in the UN Security Council this year.

The two PMs affirmed the importance of maintaining peace, stability, security, safety and freedom of navigation and aviation, as well as settling disputes peacefully based on international law, especially the 1982 UN Convention on the Law of the Sea (UNCLOS 1982).