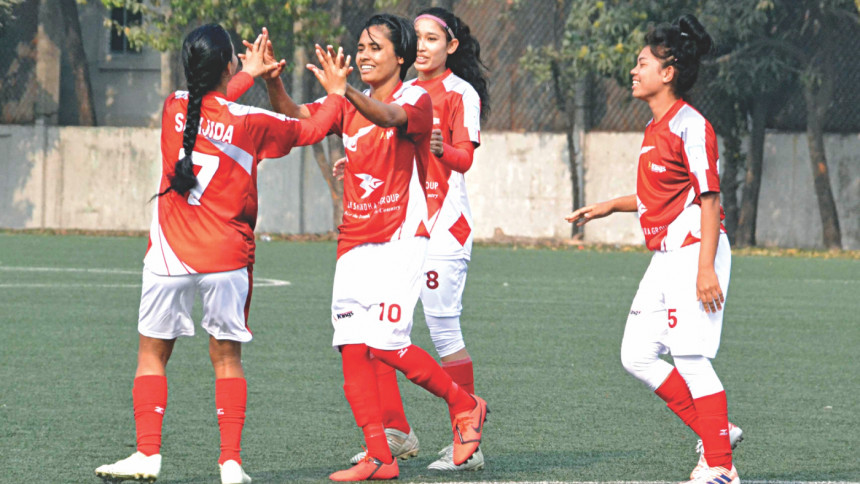 Defending champions Bashundhara Kings will play Ataur Rahman Bhuyan College Sporting Club to brighten their chances to clinch the Women’s Football League for the second time on at the Birshrestha Shaheed Sipahi Mohammad Kamal Stadium in Kamalapur on Tuesday.

The league was temporarily suspended due to the ongoing countrywide lockdown from last June but as the lockdown is expected to be eased down from Thursday it was learnt BFF decided to restart the league.

‘’BFF sent the schedule on Sunday. The lockdown will be eased from Thursday. We had been making preparations during the lockdown in our club under the strict health protocol. Even, the federation also got special permission from the sports ministry, they sent a copy of that to us, so we didn't make any objections,” said Kings head of strategy and planning Bayazid Alam Zubair Nipu told Daily Sun over phone on Monday.

“It is an important match. If we win, we will almost confirm the title for the second time.  However, we tested the team for COVID-19 on Sunday and all of the players, officials reported negative. The team is confident enough for the match,” he told.

BFF sent a schedule to the participating clubs just two days back though it hadn't announced the schedule officially.

However, in the ongoing league, the reigning champions are currently leading the point table with a total of 30 points from 10 consecutive wins ARB CSC are at the second with a total of 27 points from 9 wins and one defeat. The game is scheduled to start at 12:00 AM.

In the first-leg match, Kings beat ARB CSC by 0-1 goal. If the league leaders earn full 3 points against ARB CSC they are expected to come inch closer to the title.

Their three remaining matches will be held against fourth-placed Cumilla United on July 15, fifth-placed Jamalpur Kacharipara Akadas on July 17 and sixth-placed Nasrin Sports Academy on July 19.