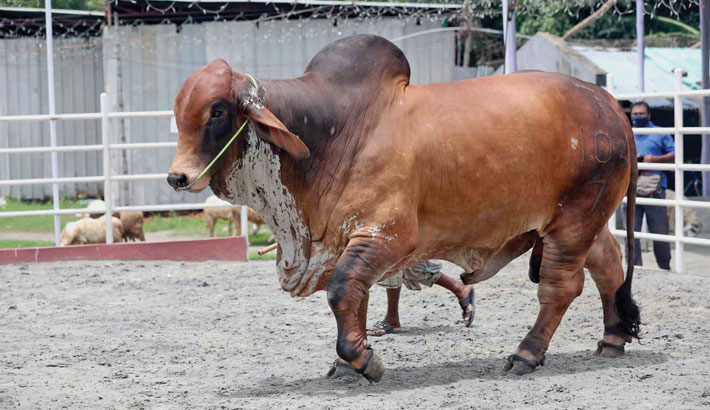 It is easy to spot a healthy sacrificial animal if a buyer follows some specific guidelines while purchasing the animal.

A large number of sacrificial animals will trade in the capital and elsewhere in the country ahead of Eid-ul-Azha. Many dishonest traders will try to sell diseased cattle during the rush hour.

Many cattle traders make the sacrificial animals fat by injecting medicine that helps accumulate water in their bodies and look bulky.

Livestock experts have given some advices for the buyers to detect sick sacrificial animals. Bangladesh Food Safety Authority has also given some special advices for cattle breeders, buyers and sellers.

Sick cattle may die anytime before Eid-ul-Azha and consumption of the meat of such animals is hazardous to human health, experts warned.

Though the use of steroids and harmful drugs for fattening cattle is prohibited by the Fisheries and Livestock Act 2010, dishonest cattle farmers are still using those to make their animals look attractive to customers.

Farmers often use high doses of antibiotics and steroids, the meat of these animals contain remnants of the chemicals which harm kidneys, liver, heart and other organs upon consumption, according to experts. Dr. Shaikh Azizur Rahman, Director General of Department of Livestock Services, has urged buyers and traders to follow some guidelines for buying healthy cattle.

He also shared some tips to identify disease-free cattle. He said the diseased cattle have trouble breathing, saliva falls from the mouth, do not want to eat, do not move and do not move the tail.

The nose of healthy cattle remains wet and such animal frequently urinates and defecates and if grass or straw are placed in front of it, it tries to pull them.

On the other hand, sick cattle are averse to taking any food, do not urinate and defecates normally and always lay down with drowsiness, he said.

The buyers have to check that the animal does not have wound marks on the hide, hoofs and tongue, broken horn or cut on the tail, ear.

The country has a stock of around 11.91 million sacrificial animals against the demand for around 10.5 million, according to the Department of Livestock Service.