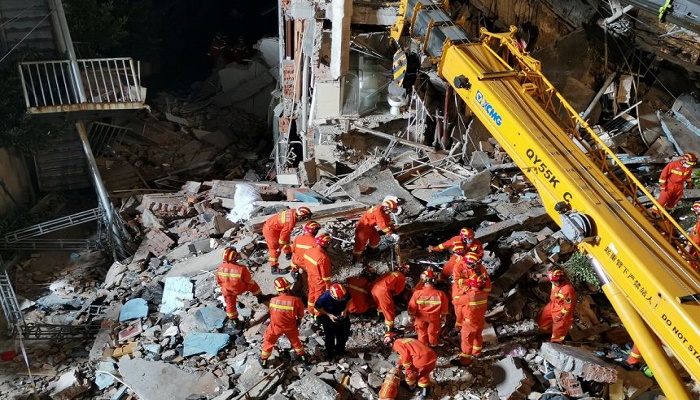 Rescuers have pulled another seven survivors out of the rubble of a small budget hotel that collapsed in the eastern China city of Suzhou, state media said Tuesday.

The Siji Kaiyuan hotel collapsed on Monday afternoon, with authorities initially saying one person had died.

The latest figures bring to 14 the number of those rescued, according to the People's Daily.

No further information was given on the number of people still missing.

No cause for the disaster has yet been given.

The hotel opened in 2018 and had 54 guest rooms, according to its listing on the travel site Ctrip.

Suzhou, a city of over 12 million roughly 100 kilometres (60 miles) west of Shanghai, is a popular destination for tourists drawn to its canals and centuries-old gardens.

Building collapses or accidents are not uncommon in China, often due to lax construction standards or corruption.

The collapse of a quarantine hotel in southern China's Quanzhou city last March killed 29 people, with authorities later finding that three floors had been added illegally to the building's original four-storey structure.

And authorities in May evacuated one of China's tallest skyscrapers, the SEG Plaza in the southern city of Shenzhen, after it shook multiple times over several days.