MoU signed to set up “Bangabandhu chair” at Delhi University 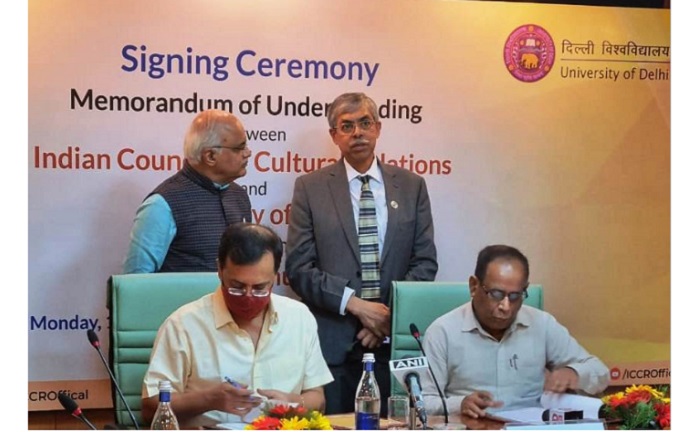 In another significant breakthrough towards India-Bangladesh ties, India has formally begun an initiative to establish 'Bangabandhu Chair' at the Delhi University to honour Bangladesh's founding father Sheikh Mujibur Rahman.

A memorandum of Understanding (MoU) was signed on Monday in New Delhi between ICCR and the University of Delhi to set up ‘Bangabandhu Chair’ at the university to honour Bangabandhu Sheikh Mujibur Rahman, the founding father of Bangladesh and the greatest Bengali of all times.

This is the first Chair in India established by the Indian Council for Cultural Relations (ICCR), which will focus on the Indo-Bangladesh common cultural heritage and subjects like Anthropology, Buddhist Studies, Geography, History, Modern Indian Languages (including Bangla), Music and Fine Arts, Political Science, International Relations and Sociology.

Director General of ICCR Dinesh K. Patnaik and Vice-Chancellor of Delhi University Prof. P C Joshi signed the agreement on behalf of their respective sides at a ceremony at ICCR in Azad Bhavan in the evening.

As per the MoU, a foreign visiting professor or a subject expert on Bangladesh is likely to be a person of Bangladeshi origin will be occupying the “chair”.

President of ICCR Vinay Sahasrabuddhe and Bangladesh High Commissioner to India Muhammad Imran witnessed the signing ceremony when senior officials of the mission and Indian Ministry of External Affairs were present.

Diplomatic sources said this initiative is the outcome of one of the understandings reached during Prime Minister Narendra Modi's state visit to Bangladesh in March 2021.

The 2021 is a very special year for India-Bangladesh relations as this year marks the commemoration of birth centenary of the Father of the Nationa Bangabandhu Sheikh Mujibur Rahman, Golden Jubilee of the Independence of Bangladesh and the 50th anniversary of establishment of the diplomatic ties between Dhaka and New Delhi.

Diplomatic circle in Dhaka and New Delhi said the two neighbouring countries have set a number of examples to the world during the COVID-19 pandemic. When the entire world is grappling to fight off the coronavirus by closing the border, the two South Asian neighbours continued to script a golden chapter in relations.

Indian Foreign Secretary Harsh Vardhan Shringla, who sent a message on the occasion, said Bangabandhu Sheikh Mujibur Rahman understood that Indians and Bangladeshis have a shared future and was a strong proponent of India-Bangladesh friendship and brotherly ties.

“I am happy to note that we have, together, built on that vision. India and Bangladesh continue to attach a very special importance to their bilateral relations. By any indicator, the bonds between our two nations are marked by a rare degree of closeness, substance and understanding,” he said.

Shringla said Sheikh Mujib also laid the foundations for his country’s growth and development and Bangladesh is today one of the major engines of growth in the region with impressive economic expansion rates and rapidly improving socio-economic indicators. “There are many areas in which we have learnt from Bangladesh and will continue to do so.”

The India Foreign Secretary said Sheikh Mujib was all the more remarkable for being a strong voice against radicalism and extremism of any kind. His message of friendship and moderation has a special resonance in today’s world where a pandemic has accentuated fault-lines and divisions.

“Bangabandhu is revered in India. His struggles, his accomplishments and his values continue to inspire,” he said and added that the establishment of the Bangabandhu Chair in this special year of ‘Triveni’, is a fitting tribute to this great leader, his life and his work.

Shringla said ICCR has played a significant role in promoting India-Bangladesh cultural relations and suggested the ICCR to consider the possibility of establishing an Indian Chair in Bangladesh in future.

Speaking on the occasion, the ICCR President said they are proud to establish ‘Bangabandhu Chair’ at Delhi University in memory of undisputed leader like Bangabandhu Sheikh Mujibur Rahman.

Bangabandhu’s contribution is a deadly chapter for the Bengali nation.

Muhammad Imran said no doubt, the establishment of ‘Bangabandhu Chair’ is a timely initiative and hoped that it will immensely contribute to broaden our scope for intellectual and academic exchanges and intensify people to people contact.

It would hopefully bridge the gap of information about today’s Bangladesh and her people – the unique history, determination and struggle for emancipation and independence, the recent economic achievements, the emerging soft power, the secular ideology, and overall future of the country, he said.

The Bangladesh envoy said Bangabandhu Sheikh Mujibur Rahman is one of the most iconic 20th century politicians of the world.  We believe the coming generations would continue to find Banglabandhu, a towering personality, with rock solid determination like Himalayas, as compared by Fidel Castro to describe him.