Zimbabwe win will inspire Tigers ahead

Zimbabwe win will inspire Tigers ahead 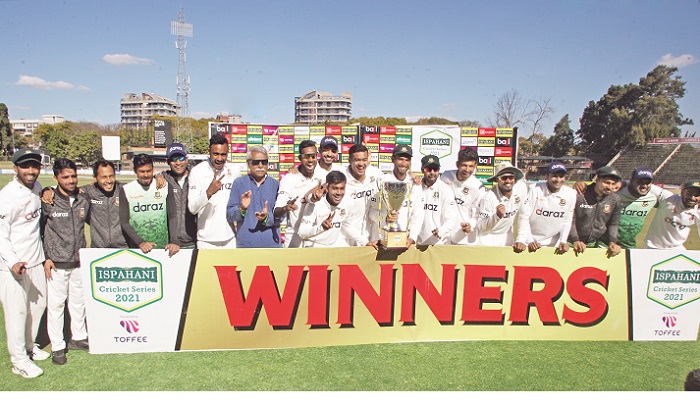 Bangladesh Test skipper Mominul Haque expressed his satisfaction after clinching their maiden Test series victory in Zimbabwean soil on the back of a unified effort as he believed it would inspire the team ahead of the second edition of the ICC Test Championship.

“I think winning the Test match would inspire everyone for the Test Championship season two and it would encourage everyone in our team to understand their playing role. So we would try to improve the little processes that previously didn't favour us but it had during the Test match,” Mominul told reporters after the win on Sunday.

Bangladesh produced a scintillating all-round performance to register a massive 220-run victory against hosts Zimbabwe in the one-off Test series at Harare Sports Club on the same day.

From the batting perspective, Mahmudullah (150 not out), Najmul Hossain (117 not out) and Shadman Islam (115 not out) scored centuries in the Test with quite a few handy knocks from others while Mehidy Hasan picked the highest nine wickets in the match and Taskin Ahmed and Shakib Al Hasan grabbed five-wicket each in the Test.

“The partnership between Riyad (Mahmudullah) bhai and Liton (Das) was very important as we had already lost six wickets for only 132 runs and we needed a partnership.

“Shadman (Islam) and Shanto (Najmul Hossain) also batted the way they should bat and I think they have utilised the opportunity very well. They have played normal cricket and I have liked it a lot,” Mominul said, adding that he was also impressed with the bowlers’ performance in the Test.