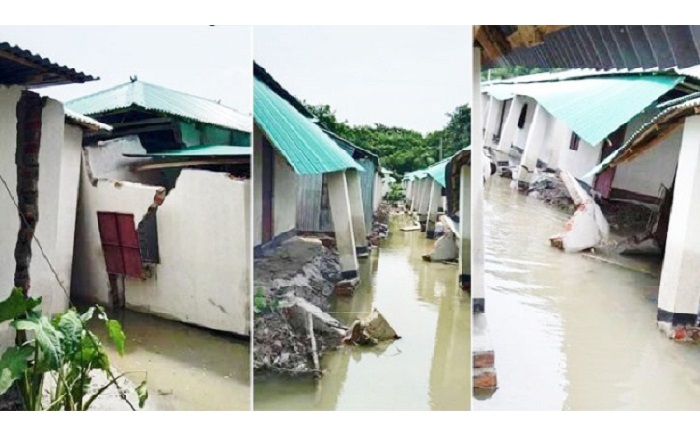 The Prime Minister’s Office (PMO) has outlined a new plan to buy land for constructing houses for homeless people under the Ashrayan project.

The PMO has taken up a fresh plan as many newly-built houses, meant for the homeless, had collapsed due to the construction on low-lying areas, faulty design and the use of substandard materials.

The Ashrayan Project faced a debacle as the houses are mostly constructed on low-lying Khas land. As a result, many houses collapsed as those were built in a hurried manner on soft land.

Many discussants alleged that the Ashrayan Project faced issues as most of the Khas land belongs to low-lying areas, resulting in cracks on the walls and floors of the newly built houses as most of the lands were filled with soil and sand hurriedly.

In this regard, the PMO secretary said an initiative has taken to procure land if Khas high-land is unavailable.

Sources said the local administration has been asked to take suggestions from public representatives including lawmakers regarding the Ashrayan Project, a dream project of Prime Minister Sheikh Hasina for homeless and landless marking the Mujib Year.

Besides, Deputy Commissioners (DCs) have been asked to visit site areas to expedite monitoring to check irregularities and negligence of work in the construction work of houses under the project.

The PMO outlined the new plan as allegations of irregularities and negligence of work in the Ashrayan Project have been raised against the local administration officials in 36 upazilas of 22 districts.

In this regard, Prime Minister Sheikh Hasina has also expressed her anger over the anomalies and negligence in the project.

Some five officials of local administration have been made Officer on Special Duty (OSD) while Departmental Proceedings (DPs) also initiated against them.

“From now on, you should take suggestions from public representatives and increase their participation in the work of Ashrayan Project,” a UNO said quoting the PM’s Principal Secretary and PMO secretary as saying.

The two secretaries came up with the directives as some lawmakers have also criticized the irregularities in the Ashrayan Project work.

“They (UNOs and ACs) don’t have that much experience, so all DCs should expedite monitoring and often visit site areas,” the principal secretary said.

“Those who were the victims of the situation due to natural calamities, will not face the music but those who were involved in irregularities will face punishment,” he said.

The government built a total of 118,380 houses for the homeless as Prime Minister Sheikh Hasina’s Mujib Year gift.

Following the Prime Minister’s announcement that no one will remain homeless in the Mujib Year, the government made lists of over 885,000 homeless families and took the steps to change their lives.