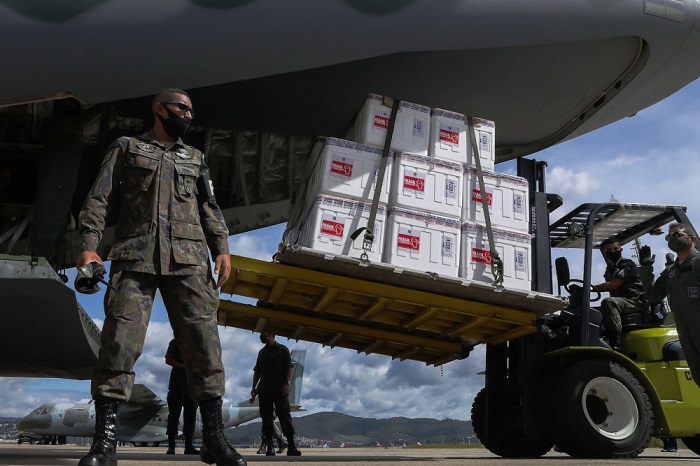 The Biden administration ships millions of vaccines to the region as its public health crisis worsens.

The United States is ramping up the delivery of coronavirus vaccines to Latin America in a move aimed at addressing the region’s public health crisis, but the endeavor could also curb China’s efforts to wield its vaccine exports for geopolitical influence.

The flurry of announcements signal the United States is turning a corner in vaccine diplomacy in Latin America after lagging behind both Russia and China for months in early vaccine exports to the region.

“All in, when you look at what the United States has been sharing, Latin America has been by far the largest beneficiary. And this is just the beginning,” said Juan Gonzalez, senior director for the Western Hemisphere on the White House National Security Council.

Experts said there’s a geopolitical element to vaccine deliveries too as the United States looks to outpace Russia and China’s vaccine response in the region.

“I don’t look at this as a zero-sum game, but that doesn’t mean the vaccine diplomacy itself doesn’t have geopolitical or foreign-policy implications,” said Pepe Zhang, an associate director at the Atlantic Council and expert on relations between China and Latin America. “If Chinese vaccines are the only available solution in one country, that potentially puts China in a position to pursue additional interests or priorities.”

Western officials have already accused both Moscow and Beijing of using vaccines for geopolitical leverage. Paraguay and Honduras, for example, said they faced pressure to cut diplomatic ties with Taiwan in exchange for receiving Chinese-made vaccines. Countries that recently agreed to cut ties with Taiwan in favor of China—the Dominican Republic, El Salvador, and Panama—were among the first recipients of Chinese vaccines. And Brazil backtracked on a decision to bar Chinese telecom giant Huawei from developing its 5G network in a bid to scoop up as many Chinese vaccines as it could.

“In order to gain more access, presence, and influence in the region, [China] and Russia are taking advantage of the pandemic, deploying medical diplomacy and disinformation campaigns—often overpromising and underdelivering,” testified Adm. Craig Faller, commander of the U.S. Southern Command, before the Senate in March.

Gonzalez said the Biden administration isn’t dissuading countries in the region from accepting Russian or Chinese vaccines but is concerned about how both countries are using vaccines for leverage.

“We had countries early in the administration approach us and ask what our reaction would be if they accepted vaccines from China or from Russia,” Gonzalez said. “Our response was: You need to vaccinate your populations, and you need to make these decisions based on your national interest. We’re not going to tell you not to do that.”

He added, “however, we were concerned about reports that China and Russia were using vaccine diplomacy to secure political agreements.”

COVID-19 cases are worsening in Latin America and the Caribbean, where only 1 in 10 people have been vaccinated. Carissa Etienne, director of the Pan American Health Organization, called it an “unacceptable situation” in a press conference on June 30. Countries in South America account for just 5 percent of the global population but roughly 25 percent of the global coronavirus death toll.

Scientists are also closely monitoring the Lambda variant that causes COVID-19, a variant that first emerged in Peru late last year. There’s no indication yet that Lambda could be as deadly or widespread as the Delta variant that is dominating U.S. infections, but the variant’s spread underscores how the virus can evolve further in a region hard hit by the pandemic without adequate vaccine supplies.

The Biden administration is not planning on delivering vaccines to autocratic countries that could use the vaccines to consolidate power—namely, Nicaragua, where Nicaraguan President Daniel Ortega appears to be using vaccine supplies to garner political support amid a sweeping crackdown on political opponents.

“An important criteria when it comes to the sharing of vaccines is we want to make sure they’re not being used politically or for social control,” Gonzalez said.

Despite the delivery of millions of U.S. vaccines, many Latin American countries are a long way off from getting the outbreak under control. Some public health experts believe the region will see coronavirus outbreaks as late as 2024—and new potential strains emanating from those outbreaks could quickly spread to other parts of the world.

“At the end of the day, this is not just about this region,” Zheng said. “If there are new variants coming out of any region of the world, the rest of the world is unsafe too.”