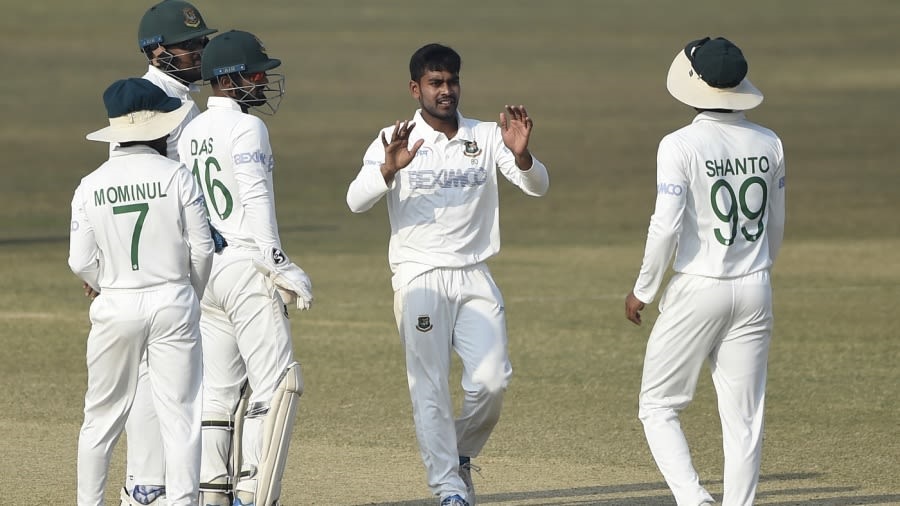 Bangladesh registered their maiden Test series win against Zimbabwe in their backyard after beating the hosts by 220 runs in the one-off Test series at Harare Sports Club on Sunday.

Off-spinner Mehidy Hasan and pacer Taskin Ahmed picked up four wickets each in Zimbabwe’s second innings as Bangladesh bowled the hosts all out for 256 runs on the final day to complete the only second overseas series victory in their Test cricket history.

The previous time Bangladesh won a Test series abroad was back in 2009 when they clean swept a second-string West Indies side in a two-match Test series.

Bangladesh, who needed only seven wickets on the fifth day to seal the victory, had to wait for 17 overs to get their first success on the day after the hosts resumed on 140-3, still needing 337 runs to produce a miracle.

Mehidy, who claimed five wickets in the first innings, gave Bangladesh twin success by removing Dion Myers (26) and Timycen Maruma (0) in four balls before Taskin dismissed Roy Kaia and Regis Chakabva (one) in successive overs to push back the hosts further.

Taskin thought he got the wicket of Victor Nyauchi after he uprooted his stumps but the batsman was called back by the umpires after the reply showed the bowler overstepped.

Bangladesh then struggled quite a bit to dismiss the tail-enders of Zimbabwe as Donald Tiripano (52 off 144 balls) put up two stands of 34 and 41 runs respectively with Nyauchi and Blessing Muzarabani (30 not out) but it only could delay Bangladesh’s victory.

Taskin finally removed Nyauchi on 10 while another pacer Ebadot Hossain got his first wicket in the match by edging Tiripano to wicketkeeper Liton Das.

Mehidy completed his best away Test performance with 9-148 in the match by dismissing Zimbabwe's last batsman Richard Ngarava (10) to guide Bangladesh to their first Test victory nearly after 17 months.

Their previous Test win also came against the same side when they toured Bangladesh last year.

Bangladesh earlier made 468 and 284-1d runs respectively in their two innings to set Zimbabwe a target of 477 runs after bowling out Zimbabwe for 276 runs in their first innings.

Mahmudullah was named player of the match for his unbeaten 150 runs in the first innings who also received a guard of honour from his teammates before the start of the final day’s play after verbally announcing his Test retirement in the middle of the Test.