Copa America Final: Neymar breaks down after Brazil's defeat to Argentina, Messi consoles him with a tight hug 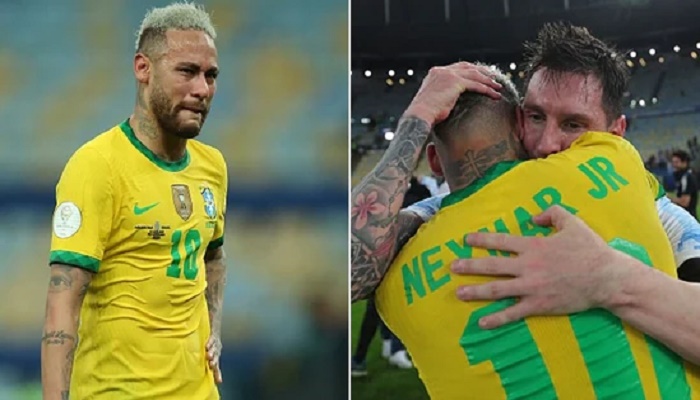 While there was jubilation for Argentina at the Maracana, the outcome of the Copa America final on Sunday resulted in heart-break for Brazil, who lost 0-1. After the match got over, there were quite a few defining images, such as Argentina lifting their champions player Lionel Messi on the shoulders and Messi finally getting his hands on a major international trophy for the first time in his career.

However, the two sights that would not be easy to forget are that of Brazil forward Neymar breaking down in tears and how Messi came to console his friend by giving him a tight hug. Shortly after the final whistle blew, the cameras turned to Argentina, who basked in the euphoria of winning their first Copa America title since 1993. But at the same time, Brazil were gutted, and the feeling was visible best in Neymar, who was on his knees and crying profusely.

Neymar may go on to win many trophies for Brazil but this one would sting. He was consoled by his teammates, the manager and support staff, but the greatest and the most heart-touching gesture of the night came from none other than Messi himself, who came around and tightly hugged Neymar as he tried to gather his emotions.

Messi and Neymar were voted as the best players at the Copa America just before the final. While Neymar scored two goals and assisted three in five matches, Messi netted four times while providing five assists in six games. Messi who had scored a brace against Bolivia, and then added a goal in the quarterfinal match against Ecuador, is one short of equalling Pele's record of the most international goals by a South American player.

Messi had the change to equal the Brazilian legend's feat in the closing stages of the match, where he was one on one with the goalkeeper, but could not provide the finishing touches. Pele, in his legendary career, had also scored 77 goals for Brazil.