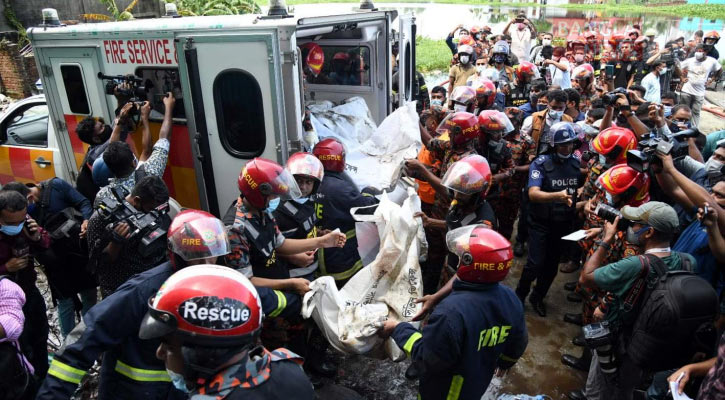 The death toll from the factory fire at Rupganj, Narayanganj jumped to 52 as firefighters started tallying fatalities in the massive blaze.

“At least 49 bodies have been recovered from the debris of the building during the search operation,” said Abdullah Al Arefin, deputy assistant director of the Fire Service and Civil Defence in Narayanganj district.

The massive fire that swept through the seven-storey building housing a juice factory of Hashem Foods Ltd at Bhulta Karnagop in Rupganj, Narayanganj broke out at 5 pm on Thursday.

“Though the fire was brought under control around 12:35 am Friday, firefighters are engaged to douse the flame on the sixth floor of the building as pocket fires continued to break out,” said Abdullah Al Arefin, deputy assistant director of the fire service and civil defence in Narayanganj district.

"The death toll might go up as the search operation is still ongoing on the fifth and sixth floors of the building," said Deputy Inspector General (DIG) of the police (Dhaka range) Habibur Rahman.

Replying to a question he said the Narayanganj district administration has formed a nine-member committee to probe the fire incident.

Immediately after the incident, two bodies were recovered from the building. The deceased were identified as factory workers Mina Akhter, 33, and Swapna Rani 45.

Ten of the injured were sent to the DMCH while 16 admitted to US Bangla Medical College and Hospital, Rupganj, said the hospital authorities.

Md Shahadat Hossain, a duty doctor of the US Bangla Medical College, confirmed the deaths of two workers.

Bachchu Mia, inspector in-charge of DMCH police camp, said three of the injured were shifted to DMCH's Sheikh Hasina National Institute of Burn and Plastic Surgery Institute as they were having breathing problems caused by smoke during the fire.

Abu Bakar Siddique, one of the injured, said, “We sustained injuries as we jumped in a hurry out of panic to get out of the building.”

The numbers of both the injured and deceased may rise as seven to eight thousand workers were working inside the factory, he said.

Russel Sikder, duty officer at the control room of Fire Service and Civil Defence (headquarters), said 18 units of firefighters have been working in the building to completely douse the flame.

Deputy assistant director Arefin, meanwhile, said the fire broke out from the second floor of the building.