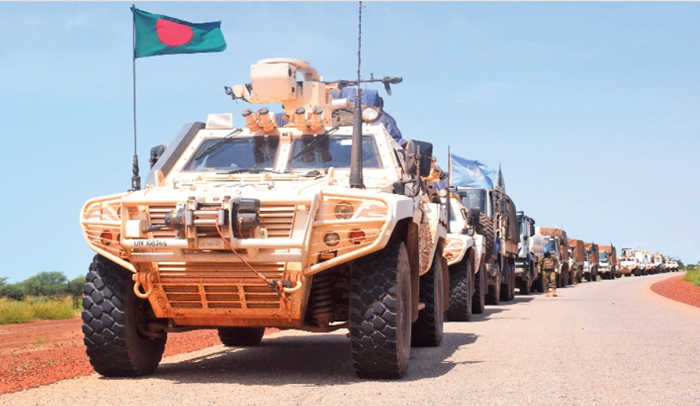 A long convoy of Bangladesh Army is waiting for the clearance of the search and detection team to go ahead during a convoy escort operation in Gao region of Northern Mali. — Ahamed Ullah

Overcoming fears of bomb attack in every moment, the peacekeepers of Bangladesh Army deployed in the West African country of Mali are carrying out successful operations one after another by going far away from their camp in the desert.

Although they can lose lives in an explosion, Bangladesh Army’s specialized search and detection team is at the forefront to identify IED or improvised explosive device to keep the lives of other members of the team safe.

The United Nations Multidimensional Integrated Stabilization Mission in Mali (MINUSMA) is currently marked as the most dangerous peacekeeping mission in the world where peacekeepers have the highest mortality rates.

Improvised explosive devices or IEDs are the largest single threat in Mali. The peacekeepers are becoming the main target of terrorists in Mali.

In addition to security threat, the peacekeepers deployed at Gao and Kidal in Mali have to face extreme weather, scarcity of water and poor mobile connectivity.

Operation ‘Convoy Escort’, logistics supply to various MINUSMA camps located in different parts of sector east, is a very risky operation and there are specific contingents to carry out this responsibility.

However, during the rotation of the contingent, BANBAT was repeatedly assigned by the Sector Headquarters to supply logistics to the vulnerable areas.

In one such operation, on November 6 in 2020, terrorists attempted to carry out an IED attack on BANBAT’s operations team at Ihagana, about 260 km east of BANBAT Camp.

“The possibility of crossing a hidden landmine or some other type of improvised explosive devices (IEDs) is very real here in Mali. For this reason, when I find anything suspicious, I tells the entire convey to stop. After searching the area, we move forward,” said Major Md Shahrier Mahmud Khan, Search and Detection team Commander of BANBAT 7.

He said, “During an operation convoy escort, we are passing through a canalis road. There is no other road which we can use to move forward. As we can’t see the other side of the road, we check the area as part of our routine job.”

“The BANBAT operation team was able to successfully identify and detect the IED just before the explosion. After neutralising such objects, we move forward,” he added.

Major Arman, Company Commander of Mechanized Company-1 of BANBAT 7, said, “During the operation convey escort, terrorists put an IED on the road. It was an artillery shell. Our Search and detection team identified the IED. Later, we neutralised this.”

Like operation ‘Convoy Escort’, members of Bangladesh Army deployed in Mali foiled a number of IED attacks and saved lives of many people.

“The efficiency and professionalism of BANBAT is appreciated by all quarters,” said Colonel Zubayer Hasnat, also the country senior (Bangladesh) in MINUSMA.

Senior Colonel Zhu Jinsong, sector east commander in Mali, said, “The security situation in Mali, specifically in our area of responsibility, is really challenging, unstable and unpredictable. The peacekeepers of MINUSMA and government forces are becoming the main target of the terrorists in Mali.”

“I would like to mention about BANBAT. Every time when they were tasked, they executed all the jobs with utmost professionalism,” he added.

Bangladeshi soldiers working in UN missions said death lurks in every operation. Overcoming those obstacles with professionalism and courage, the members of the Bangladesh Army come out victorious and the red-green Bangladesh flag is flying.

Major General Paul Ndiaye, Deputy Force Commander of MINUSMA, said, “Bangladeshi troops never said no to any tasks. Bangladeshi battalion is well trained, well equipped and also committed to executive their mission. And for us it is a satisfaction.”

“Bangladeshi peacekeepers, especially BANBAT, placed in Gao, perform outstandingly. They conducted a big operation called ‘Operation Mongoose’ this winter. They have been able to reinforce our layout from Gao to Doyenja. They are very professional to meet our operational requirements. Thanks to them,” he added.

By Ahamed Ullah, back from Mali