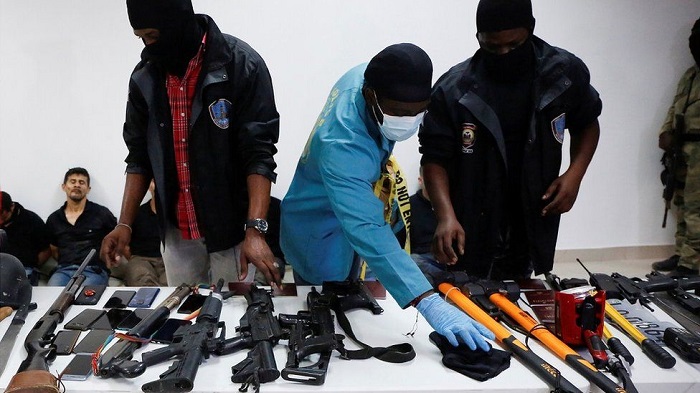 Eight of the suspects are still on the run, while 17, including the two Americans, have been arrested.

The remaining suspects were shot dead during gun battles with the police in the capital Port-au-Prince.

A group of gunmen burst into the president's private residence in an affluent area of the city in the early hours of Wednesday. Mr Moïse's wife, Martine, was injured in the attack and has been flown to Florida for treatment where she is said to be in a stable condition.

It is not yet clear who planned the attack or what motivated it. Haiti's interim Prime Minister Claude Joseph, however, told the BBC that the 53-year-old president may have been targeted because he was fighting "oligarchs" in the country.

On Thursday, police presented some of the suspects to the media along with weapons, passports and other evidence. "We will strengthen our investigation and search techniques to intercept the other eight mercenaries," Mr Charles said.

"It was a full, well-equipped commando, with more than six cars and a lot of equipment," Haiti's elections minister Mathias Pierre said.

Colombia's government later said at least six members of the hit squad appeared to be retired members of its military. The country is assisting with Haiti's investigation efforts.

The US state department, meanwhile, said it could not confirm if any of its citizens had been held.

Investigators are still searching for the masterminds of the killing, which has triggered some civil unrest in what is the poorest nation in the Americas.

An angry crowd gathered on Thursday to watch the police operation in the capital. Some cars were torched, and people gathered outside a police station where the suspects were being detained.

A 15-day state of emergency remains in force across the country.

Who is in control of the country?

The assassination has prompted confusion over who is in charge of Haiti. The constitution says the president of the Supreme Court should take over, but he recently died of Covid-19.

After that, amendments suggest the prime minister should lead. Ariel Henry had been named this week as the new PM but he has not yet been sworn in. He insists he should be in charge.

Mr Joseph, the interim prime minister, told the BBC he was "puzzled" by Mr Henry's statement, adding: "We need to leave those things behind and put Haiti forward."

The UN has said Mr Joseph should remain in charge until elections are held later this year.

He has said he will not stand for the presidency. "I'm not here to stay too long. We need to hold elections. I do not have a personal agenda," he said.