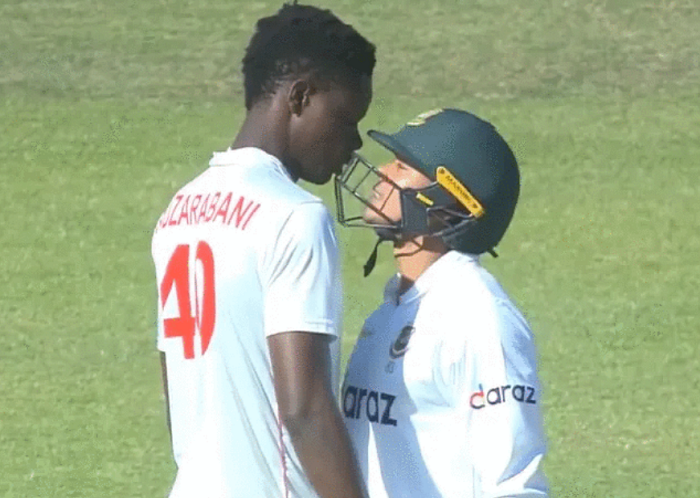 Bangladesh pace bowler Taskin Ahmad said on Thursday that fielding coach Ryan Cook inspired him to take batting seriously and added that he is happy to contribute late in the order.

Mahmudullah struck a sensational hundred in his comeback Test while Taskin Ahmed made an unforeseen fifty to guide Bangladesh post a mammoth first innings total against Zimbabwe on the second day of a one-off Test series in Harare on Thursday.

Mahmudullah made an unbeaten 150 off 278 balls, his career-best innings that gave a new lifeline to his red-ball career while Taskin scored 75 off 134 balls as Bangladesh made 468 runs in 126 overs in their first innings and registered their highest ever Test total at Harare Sports Club.

Zimbabwe also gave a strong reply and finished the second day on 114-1 in 41 overs, still trailing by 354 runs to Bangladesh’s first innings total.

‘’Yes, we have a new batting coach( Ashwell Prince) in this series, but I hadn't quite worked with him, as I had only chatted with him a little, as it's mostly our fielding coach Ryan Cook, who pushes us bowlers and tailenders to practice batting, and he had told me in the last series, that I should buy some batting spikes for this series so that I can use them to bat,’’ Taskin said after the second day’s play.

‘’Normally the bowlers go to bat while putting on the bowling shoes, but this is for the first time that I had used batting shoes for batting. He (Ryan) was happy with my innings today, and he told me, that whether I'm a bowler, I should consider myself as a batsman when I go to bat, that's why the bowling spikes were needed. So, I would like to thank Ryan Cook to always inspire me to practice batting,’’ he said adding that Mahmudullah guided him in the middle.

‘’My previous best score in Tests was 33, as when I had crossed 40 runs, Riyad Bhai had been consistently telling me, that 'no more loose shots now, play with the straight bat,' and when I had crossed 50, and then 70 runs, he was still telling me to play with the straight bat, and he had wanted me to pick up a hundred as well, but he also wanted me to think about that less, and told me to focus on the next delivery I was going to face,’’ he said.

Taskin added that he confronted Blessing Muzarabani as the pace bowler used slang language after failing to get him out.


‘’The Zimbabwean pacers had been bowling very good deliveries to me, as they had been bowling bouncers, trying to get me out, and I was being able to handle them alright, and not being successful at it, they had used slangs to me, but I had revolted when it happened for the third time, and I had told him (Muzarabani), that, 'why are you uttering slangs to me? Try to do something with your bowling.' So, this is what happened on the field today, nothing else,’’ Taskin said.