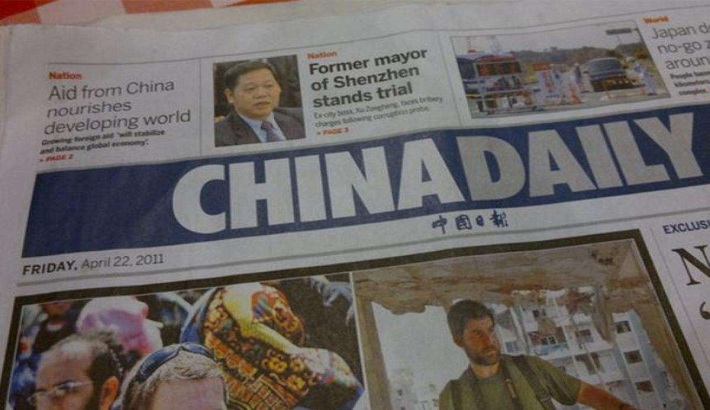 Chinese state-run newspaper China Daily reportedly paid millions to prominent US newspapers and magazines in the last six months in a bid to buy media influence. Citing disclosures made by the Justice Department, an independent analyst reported that the English-language propaganda outlet paid several hundred thousand dollars to American publications like Time magazine and Foreign Policy magazine over a period of six months. According to the disclosure, Time magazine received $700,000, Financial Times $371,577, Foreign Policy magazine $291,000, the Los Angeles Times $272,000, and others received over $1 million.

As per reports, China Daily, which is controlled by the Chinese Communist Party, also paid more than $4.6 million to The Washington Post and nearly $6 million to The Wall Street Journal since November 2016. Both the media outlets reportedly published paid supplements that China Daily produces called “China Watch”. The inserts are designed to look like real news articles, however, they often contain a pro-Beijing spin on contemporary news events.

China Daily’s clients in US

According to ANI, the US Justice Department has for years required China Daily to disclose its activities semi-annually under the Foreign Agents Registration Act (FARA). The most recent filing, which China Daily submitted on June 1, is the first to include detailed breakdowns of payments to US news outlets. China Daily reportedly disclosed those expenditures for the period between November 2016 and April 2020.

China Daily’s clients include The Los Angeles Times, The Seattle Times, The Atlanta Journal-Constitution, The Chicago Tribune, The Houston Chronicle and The Boston Globe. According to the FARA filing, the Chinese outlet paid the Los Angeles Times $657,523 for printing services. It is worth noting that the report comes amid a time when China Daily as well as other Bejing-controlled propaganda media outlets have come under intense scrutiny owning to the coronavirus pandemic.