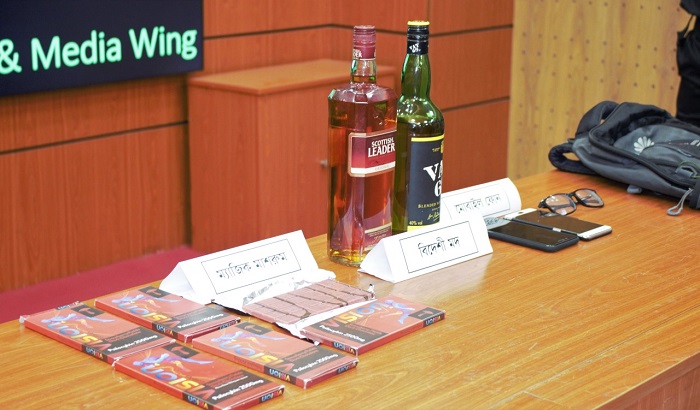 Another hallucinogenic drug named ‘magic mushroom’ was first ever discovered in the country on Wednesday.

They were arrested with five bars containing 120 slices of magic mushroom. The arrestees are highly educated and from affluent families.

The arrestees have been identified as Nagib Hasan Arnab, 25, son of Shawkat Ali of Haiderganj at Raipura upazila in Laxmipur, and Taifur Rashid Jahid, 23, son of Manjur Rashid of Kapasia in Kapasia upazila of Gazipur.

Commander Khandaker Al Moin, director (Legal and Media Wing) of the RAB headquarters, briefed this to journalists at the RAB media centre at Kawran Bazar in the capital on Wednesday noon.

Magic mushroom is a hallucinogenic drug. It can be taken with cake and chocolate. Besides, it can be taken as a capsule, the officer said.

When the user takes this drug, he loses control over him within 10 to 15 minutes. He feels he can jump from rooftop, talk to birds and animals, and embrace trees to feel its soul. The reaction of the drug lasts for about 10 hours in the user’s body.

Drug traders and users are brining it from abroad paying through Bitcoin.

A section of university students, who come of upper class society, are taking the drug.

The arrestee Arnab passed SSC in Bangladesh. Later, he went to Canada for study in 2014. He completed studies in Canada and now   he is doing a job in Canada University.

He said that he brought magic mushroom from Canada and sold the drug at a higher price in Bangladesh.

Another arrestee Jahid was classmate of Arnab when they were schooling in country.  Jahid was first addicted to marijuana and later wine.  In 2019, he was addicted to hallucinogenic drugs LSD and DMT.  Later, he came to know about magic mushroom.

Subsequently, he requested Arnab to send the drug from Canada.  In 2021, Arnab first brought huge magic mushroom to our country and sold those to drug addicts, he said.