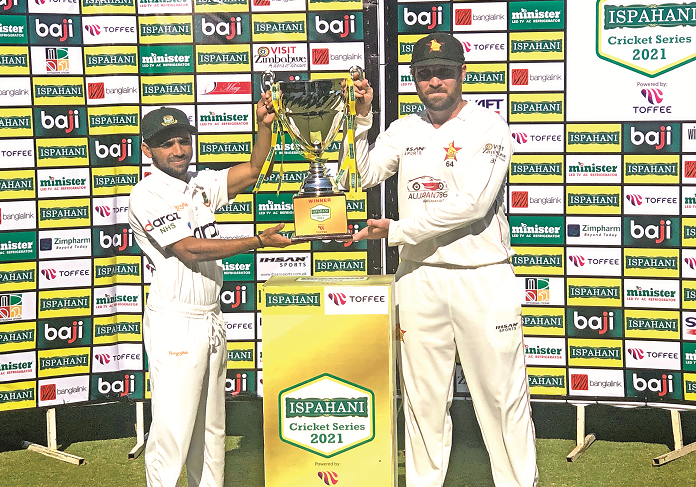 Bangladesh will be looking forward to seize the opportunity of improving their away Test records when they take on hosts Zimbabwe in the one-off Test series at Harare Sports Club today.

The Tigers struggled in overseas Test matches since their Test debut 21 years ago as they could win only four and draw as many matches in their 58 Test appearances in foreign soil.

Bangladesh, who won their last foreign Test against Sri Lanka in 2017 during their 100th Test, played 11 Tests abroad since then and only managed one draw while they suffered innings defeat humiliation in seven of their 10 defeats.

They also only managed one win and one draw in seven Tests against Zimbabwe at their backyard although the win came in their last visit to the African nation in 2013.

“Naturally there is an opportunity and we must seize it,” Bangladesh Test skipper Mominul Haque told reporters on Tuesday.

“We have to perform well in all three departments in any away series while teamwork is also very important. If we can do these all accordingly then I hope we can win the Test match,” he added.

Mominul was delighted to get experienced Shakib Al Hasan back in the Test fold after he missed the last away Test series in Sri Lanka to take part in the Indian Premier League while he also confirmed that Mushfiqur Rahim will be available for the Test.

However, the southpaw informed that they will wait till the last minute for injured Tamim Iqbal, who is still nursing a knee injury that he suffered during their Sri Lanka tour and aggravated in the first round of Bangabandhu Dhaka Premier Division T20.

However, it was learnt that Tamim wouldn’t be part of the Test as the team management wanted him fully fit for the limited-over series.

“The return of Shakib bhai will be helpful as we can increase a batsman by reducing a bowler…Mushfiq bhai is definitely going to play as he is totally fit,” Mominul said.

“Tamim bhai is very important to Bangladesh and especially for me. This is the reason why we are taking time and we will wait till tomorrow before making the final call,” he added.

While Mominul is eyeing to better his country’s Test record abroad, Zimbabwe stand-in skipper Brendan Taylor expects the young cricketers to utilise the opportunity in the absence of Sean Williams and Craig Ervine.

One day before the Test series got underway, regular skipper Williams and his roommate Ervine were ruled out and went into self-isolation after coming in contact with the Covid-19 positive family members.

“We are missing a few experienced players but we have some young and exciting players coming through. It’s a great opportunity for them to see where they stand. It is an exciting time for Zimbabwe cricket,” Taylor said.

Taylor also expected to give the visitors a run for their money in Harare as they will be looking to exploit their weakness against pace bowlers.

“We would like a fast and bouncy track. Hopefully find the edges. We don’t want to play into their hands with something too slow. They have an experienced line-up. It is the beauty of our home conditions. Hopefully it can play into our hands a little bit,” he said.