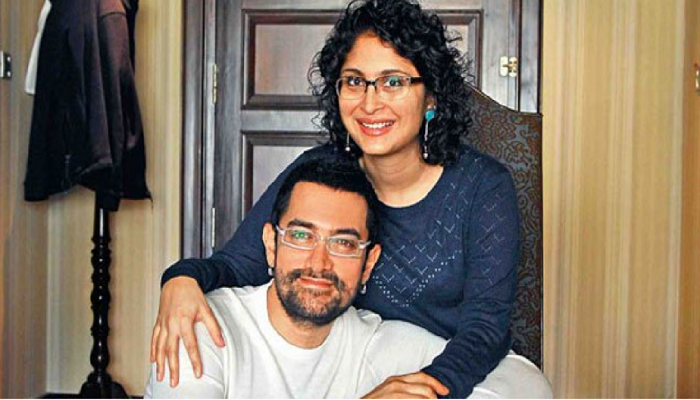 Unlike in Bollywood romantic flicks, that happily-ever-after endings always don't happen in the real lives of celebrity couples. The same holds true for Bollywood superstar Aamir Khan and filmmaker Kiran Rao, whose 15 years of marriage is rumoured to have ended the same way it began -- with "an extra-marital affair".

Grapevine is abuzz that Aamir's affair with 29-year-old Dangal co-star Fatima Sana Shaikh led to his divorce. The rumoured link-up, in fact, started way back in 2016 when Aamir and Fatima were spotted many a time walking hand in hand while they were shooting for the sports drama, where the latter played the role of the former's daughter.

Subsequently, the two were spotted together at several parties and events, and the rumours intensified when Aamir proposed Fatima’s name to filmmaker Aditya Chopra for a major role in ‘Thugs of Hindostan’ film, starring Amitabh Bachchan and Katrina Kaif. Kiran, if insiders are to be believed, was well aware of the alleged relationship.

Aamir and Kiran announced their divorce three days ago, after 15 years of marital bliss. In a statement on Saturday,the 56-year-old "Mr Perfectionist", who has a huge fan following in Bangladesh, and 47-year-old Kiran, however, pledged to remain devoted parents to their son Azad and work as collaborators on film projects "that we feel passionate about".

"In these 15 beautiful years together we have shared a lifetime of experiences, joy and laughter, and our relationship has only grown in trust, respect and love. Now we would like to begin a new chapter in our lives -- no longer as husband and wife, but as co-parents and family for each other," the statement read.

"We began a planned separation some time ago, and now feel comfortable to formalise this arrangement, of living separately yet sharing our lives the way an extended family does. We remain devoted parents to our son Azad, who we will nurture and raise together. We'll also continue to work as collaborators on films and other projects that we feel passionate about."

Aamir first met Kiran on the sets of Bollywood blockbuster Lagaan, where she was an assistant director. The couple tied the knot in 2005, after Aamir divorced his first wife Reena Dutta. Six years later, the couple were blessed with a son.

In an earlier interview with a Chinese news channel, Aamir said how he fell in love with Kiran during the making of Lagaan. "At that time, we didn’t have any relationship, we were not even great friends. She was one of the people on the unit. It was after my separation and divorce after some time that I met her again,” he had said.

The superstar has two children from his first marriage.

Known as "Mr Perfectionist" in Bollywood, Aamir has established himself as one of the most influential actors of Indian cinema through his 30-year career in Hindi films. He is the fourth richest actor with a net worth of USD 180 million.

Aamir made his debut as a child artiste in his uncle Nasir Hussain's blockbuster film Yaadon Ki Baaraat in 1973. His adult debut was with the film Holi in 1984. But he shot to limelight for his brilliant performance in Qayamat Se Qayamat Tak four years later. In 1999, he founded Aamir Khan Productions, whose first film, Lagaan (2001), got him a National Film Award.

After a four-year gap, Aamir made a comeback with back-to-back blockbusters like Fanaa and Rang De Basanti. He made his directorial debut with Taare Zameen Par (2007), which also won him the awards for Best Film and Best Director. His greatest global success came with Ghajini, 3 Idiots, Dhoom 3, PK, and Dangal.

Apart from receiving a number of awards, including four National Film Awards and the Padma Shri and the Padma Bhushan, Aamir was conferred with an honorary title by the Chinese government in 2017.