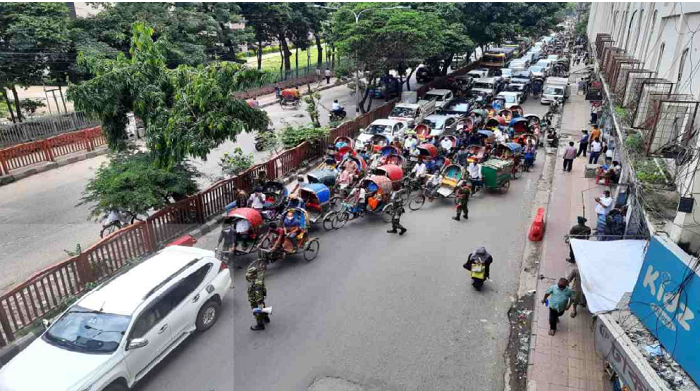 The number of vehicles and people increased on the city streets on Tuesday, the sixth day of the 14-day strict lockdown, defying government’s directives to stay home amid an alarming surge in Covid-19 pandemic, police said.

Even though movement of people was relatively low on the main roads, crowds gathered in the alleyways and kitchen markets, many of them disregarding the health rules of wearing masks and maintaining physical distance.

However, police, Rab, and army personnel, deployed to enforce the strict restrictions, were seen checking movement of people and vehicles in different points of the city including Mirpur Technical intersection and Kalabagan areas.

Traffic Inspector Asaduzzaman (Mohakhali), said “The number of vehicles is higher than Monday as many offices dealing with emergency services remained open.”

A number of people have been detained by law enforcers today as they failed to show valid reasons. Besides, more cases were also filed for flouting lockdown curbs.

A record rise in the number of Covid cases and fatalities in recent days prompted the government to go for the tough measure.

The nationwide lockdown, first imposed for a week until July 7 midnight, has now been extended for another week until July 14 midnight as the infections surged across the country.

Kitchen markets in the city remained open, with the government allowing them to operate from 8am to 5pm. However, public transport stayed off the roads as per the government directives.

Bangladesh, currently passing through the most frightful stage of the Covid-19 second wave, on Monday morning reported another record-high 164 deaths in 24 hours.

During the period, Bangladesh also broke its all-time record of cases with 9,964 fresh infections, according to the Directorate General of Health Services (DGHS).

The new cases were detected after testing 34,002 samples, said the DGHS. This puts the country's case positivity rate at 29.30%.

The new numbers took the country’s death toll to 15,229 and the caseload to 954,881. However, the fatality rate remained unchanged during the period at 1.59%.

So far, 839,082 people have recovered from the disease putting the recovery rate at 87.87%, which is declining unlike other indicators.